It's been a hot minute and for that I do apologize.  February has been an inordinately busy month with work, work travel, and visitors so I'm using my February bonus day to catch up with you all. 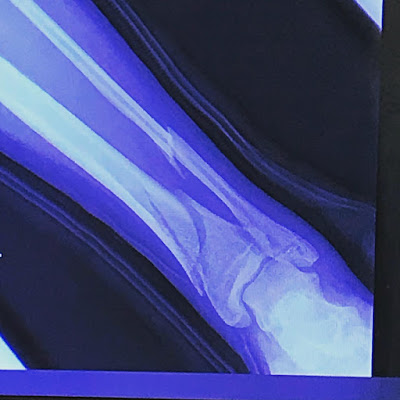 Last Sunday, I slipped on mud while walking Bowie in the trail system in a neighborhood park.  The instant I looked down at my leg, I knew something was terribly wrong.  Unfortunately, Bryan was traveling for work but he called our friend who lived in the area to try and find me.  In the meantime, I called 911, providing the most absurd directions to the operator with where I was.  An impromptu/unofficial search and rescue party of dog walkers was sent out to comb the trail system, while the paramedics tried to find the best way to get the ambulance down to me.  When the search and rescue team finally found me, one kind gentleman gave me a piggyback ride out of the woods and to the closest spot the ambulance could get to.  I was loaded into the ambulance coated in mud, with Bowie barking at being left behind and the other dogs running amuck.

Bryan had called my parents while I was in the ambulance and let them know what hospital to meet me at.  My leg wasn't swelling up massively, however they did a round of x-rays and it turns out I broke both my tibia and my fibula and would need surgery.  The earliest an orthopedic surgeon could get me in was the next morning, so the hospital splinted up my leg, wrote me a prescription for painkillers, and sent me home.  Meanwhile, Bryan's parents who were headed down from Michigan for their snowbird getaway in Corpus Christi, also received a panicked call from Bryan and he asked them to arrive a day early to our house and go to get the dog and my car from our friend at the park.  Luckily, since the ER process took a lot less time than expected, my parents and I were able to retrieve Bowie and my car and my dad filled my prescription.  Bryan's mom is a retired nurse and my parents gratefully turned me over to her care when they arrived later that afternoon.  Bryan got home that night to two hyper dogs (Bowie and Bryan's parents' dog Coda), his parents who hasn't seen in four months, and one very broken fiancee.

That night, we discovered that I was very allergic to the codeine that the ER had prescribed, so I showed up the next morning to the surgeon's office completely covered in a red rash and in pain.  They took another set of x-rays, and he probably took some pity on me while looking at my tomato-red face (as I said, covered in rash), saying he could squeeze me into a late afternoon operation the same day.  However, he cautioned me that there may have been excessive trauma so there was the chance that we would need multiple operations on my leg.  That afternoon, we showed up to the hospital, I got checked in and prepped for surgery, and Bryan and his mom waited while the surgical process took over three freaking hours.  Luckily, they were able to fix everything all in one go.  The surgeon told Bryan and his mom that my foot was completely disconnected from my leg and it looked like I tried to amputate it.  Amazingly, it was an outpatient procedure and they gave me a nerve blocker for my leg, so I was able to go home at around 7 pm that night and get one good night's rest before I would start taking the heavy duty painkillers.

I am incredibly lucky to have had Bryan's parents and Bryan at home all week while I tried to rest and recover.  They kept me well-fed, distracted, and as comfortable as they could make me.  People sent food, flowers, and cards.  I'm fortunate that I was found in the woods, able to get stabilized and into surgery so quickly, and cared for so well after.  This was a really quick summary of everything that's happened.  I have quite a lot of thoughts about the accident that I haven't fully processed yet, but please kiss all of your unbroken bones for me and be grateful for simple things like being able to stand in the shower or walk across the room.  I'll be keeping y'all posted throughout the recovery process.  Stay safe out there.