I’m back from living out of suitcases for the last few weeks.  A few weekends ago, I left the sunny skies of London (believe it or not) and headed to the grey mistiness of the Pacific Northwest for Spring Break 2018!

Bryan and I picked up my sister, her boyfriend, and their pup Pudge in Portland and drove three hours south to Bend, Oregon, listening to every type of podcast in the car ride.  At my sister’s recommendation, we planned on skiing at Mt Bachelor, which is 30 minutes south of Bend.  Bend is a small Oregon town, known for its plenitude of breweries, good restaurants, and dog-friendliness.  The city is surrounded by hiking trails through the mountains; I’d love to go back in the summertime and explore the great outdoors there.

Even though it was spring break for Oregon schools, the mountain was only really crowded on the first day of skiing.  On the second day, the skies opened up enough for us to take the lift to the summit and ski down, which pretty much broke me down for the rest of the day.  Luckily, there was a beer tent set up in the middle of the mountain, where I could have sat sunken into a snowbank with a beer for the rest of the day. 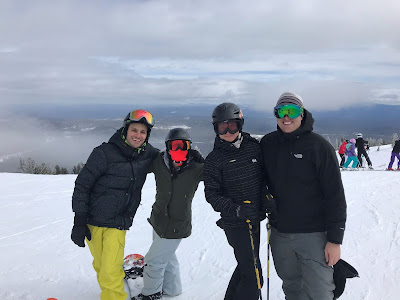 We booked a cute Airbnb cottage with a hot tub and firepit in the backyard, which we spent most of our time around.  The house was also in an extremely central location close to tons of restaurants and bars.  The four of us spent hours in the backyard chasing Pudge around while stoking the fire.  He was completely wiped out by the end of the trip (as were we).

The second part of the week, we drove from Dallas to Corpus Christi where Bryan’s parents rented a beach home for the month of March.  They’re officially winter Texans, this is their second year in a row spending part of the spring in Texas and have already booked the same rental for next year.  Crazy Coda bulked up 5 - 10 lbs during the month they were down in Texas, running endlessly up and down the beach, chasing waves and seagulls with her dog gang.  After the morning dog walk, we laid out by the pool and socialized with the rest of the retirees on vacation - which is my new goal for what I Want To Be When I Grow Up: Retired.  Even if the beach at Port Aransas isn’t the best, there’s something relaxing and calming about being by the ocean.

You’d think with all of the dog exposure we had over spring break that we’d be sick of them but it’s almost the opposite.  Does that mean there’s a pup in our future?  Anything can happen in 2018!