If you haven’t heard about it on the news already, we had a killer storm - a microburst - blow through on Sunday afternoon out of the blue.  Bryan was on a day trip to Arkansas and we didn’t even get a notification that it was going to rain that day.  I was at my parents’ house, 20 minutes north of where we live, when the skies suddenly darkened and the winds picked up.  We pulled the dog inside from the yard and within five minutes, the house was getting hammered with severe wind and rain.  With the winds howling like they were, I certainly thought that there was going to be a tornado watch, but it was “only” a severe thunderstorm warning.  Watching the weather from a state over, Bryan told us that the storm was supposed to be over at around 2:30 pm, so around that time, despite the rain, Bowie and I made a mad dash for the car and started heading home.  There was flash flooding and water built up on all of the roads but we powered through it only to get stuck in a traffic stand still less than five miles from our house.  The lights on the road were out and we spent the next 20 minutes crawling through a four-way stop.

When we turned down the street into our neighborhood, it looked like a tornado (or hurricane) had blown through.  Fences had been knocked over down, large tree limbs littered the road, and we had to weave around debris to make it to the house.  Seeing the damage from the trees around our house, I had feared the worst for ours.  We have three large live oak trees and a tall magnolia tree in our front yard.  Despite the 70 mph winds from the north, they were still standing.  In fact, all of the leaves and branches that were blown into our yard was from our neighbor across the street, who has a massive red oak.  Further down the street, a branch on a large sycamore went down, burying four cars beneath it and totaling one of them completely.  It continues to block the entire road at this point.  The last time I saw damage close to this order of magnitude was when I was in Houston after Hurricane Ike.

Of course with all of the trees branches blown over and knocking down power lines, we had no power.  No power in Texas in June.  The cell phone towers were down and my cell service was spotty at best, so I had no idea if Bryan made it through the storm (or around it) or when he was getting home that afternoon.  I took the dog around the block to check out how bad the other streets were hit and was in the process of picking up twigs from our yard when he drove up.  He said that they had clocked speeds at 107 mph at the airport and several small planes were ripped up from their tie downs and blown across the runway.  Their hanger didn’t have power but he and his copilot were able to land and make it in.  He had two bags of ice with him, and we dumped it into the cooler with water and beer.  That night, we showered using the light from Bryan’s Coleman lantern. 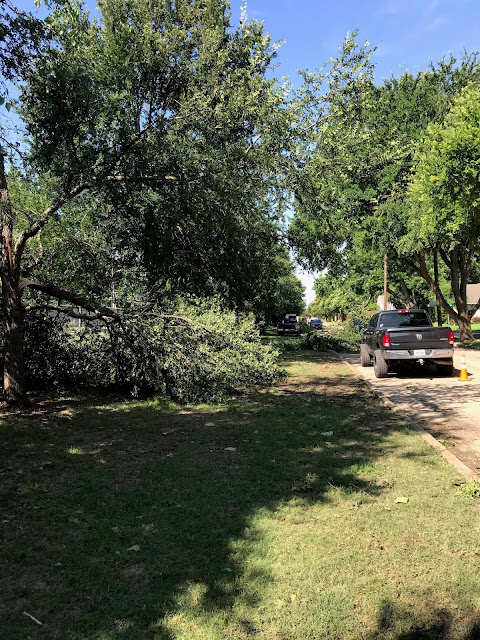 Today, we’re on day three without power.  I’ve been going in to work to charge devices and check work email.  This afternoon, Bryan emptied out our fridge  Our neighbors, who had been running a generator for the past two days, stopped yesterday afternoon.  They likely decided it was cheaper to toss everything than to run $500 worth of gasoline to keep their groceries.  The neighborhood is eerily quiet at night.  You’ll see the occasional person walking their dog by flashlight but no cars out and about.  We have solar powered landscaping lights and those are the only lights on our street.  We’ve lucked out as the storm brought some cooler weather with it.  We’ve slept with all of the windows in the house open and last night it got down to the mid-60s.  Honestly, I’m not complaining.  Grubhub delivered dinner last night and we still have running hot and cold water.  Our house is fine and standing and both of our vehicles didn’t suffer any damage either.  Fingers crossed that we get power back before the heat comes back around tomorrow.

In case you’re wondering, the horses are fine and doing way better than we are.  The barn got power back the same day it lost it so the fans and lights are working.  There are also no trees around the property so there wasn’t any damage to any of the barn.  One of the outdoor arenas has been flooded but otherwise everything is okay.