Happy late Halloween everyone!  I hope y’all had a spooky holiday and ate candy until your teeth hurt.


This past weekend, Bryan’s parents were in town and we had a weekend of packed activities.   On Saturday, I co-hosted a Halloween adults-only costume party with one of my friends, and we had a blast.  She completely decked out her house is everything Halloween, complete with lit candelabra in the dining room.  Everybody actually dressed up, including Bryan’s parents who we dragged along.  They were really good sports about putting on Halloween costumes, which Bryan’s mom had made for them.  Bonus points for who can guess what they were for Halloween!


On Sunday, my parents came over for a family dumpling making party.  Over the course of the afternoon, we made 87 dumplings and ate maybe half of them.  I don’t think anyone’s ever had a bad time making dumplings, especially when you get to eat them afterward.  This is the recipe that I used again - we made both vegetarian and pork ones.  My parents had to give me their secret tips to making them, which of course made them taste a lot better. 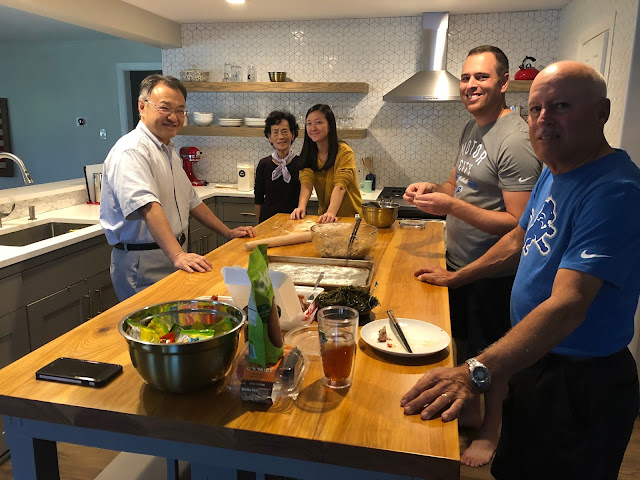 For the actual Halloween holiday, I escaped from work early and we participated in our neighborhood’s annual trick-or-treat parade, this time with a few of our friends and their kids in tow.  To quote one of the moms: this was the fastest trick-or-treating I’ve ever done!  We were done in around 15 minutes which was good because we’ve had a cold front move through Texas and it was only in the 40s.  The older kids wanted to “go again!” after we got back to the house - I’m not sure if they wanted to get more candy or just have another opportunity to run around the street like maniacs.

In pet corner, both of the animals are adapting to the colder weather in different ways.  Mae loves it, even though we had to finally put her winter blanket on her.  She’s a lot less pokey when it’s chilly out and even with the rain and lack of turn out this week, she’s been brilliant out in the arena.  Bowie’s become a lot more cuddly with the cold weather and sleeping a lot more.  He’s actually sleeping in in the morning and goes to bed a lot earlier in the evenings as well.

I can’t believe it’s November and Thanksgiving is right around the corner.  That means pie practice and menu planning in advance y’all!  Although, this weekend I might end up making this potato chowder recipe.  I've made it before and it is SO good.  How can you not like potatoes and bacon together?  Cold weather = soup weather and I cannot get enough of it.