A decade with Ryon 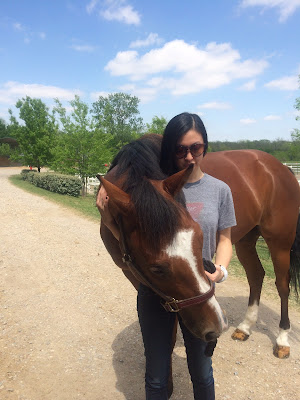 Once upon a time, in a land far far away (in actuality, just another part of Texas), a foal was born, who thought he was a puppy.

A decade later, that statement still rings true.  Ryon is now a very large puppy / horse-baby, even though he measures 17.1 hands and I need to tiptoe to see over his back.  Our very favourite large lug is turning 10 years old on Saturday, the equivalent of being around 35 years old in human years.  You would think, as an adult-horse in his mid-30s, he would be past his quarter life crisis, grown comfortable in his own skin, and started relaxing in his middle age, maybe even thinking of settling down and starting a family (jk, he can’t do that - it’s a good thing. seriously).

Instead he fools everyone into thinking he’s much younger than he really is by delighting in terrorizing his pasture mates and ripping down everything attached to his stable walls (including the panels of said walls).  His behavior in social settings is typical of boisterous pre-teens - more than happy to boss his way to the front of the line when he thinks he knows what’s going on but then hides at the back of the herd when he’s nervous and in unfamiliar territory.  This is to say nothing of the prison break he attempts every few weeks or so, only to sheepishly get caught and brought back to his stall.

Regardless of what everyone else says, I’m still more than happy to chase the big puppy around in a game of tag and laugh as he ducks, dodges, and generally runs circles around me.  Or sit quietly by his side while he eats, occasionally tug on his ears, and watch him ignore everything else in the world.  There is being present in the moment and there is being "horse present" where there is only the here and now and nothing else exists.

We’ll be rounding out the year with a big milestone - his joint operation - and all of us at the barn are staying hopeful that it’ll be successful and effective.  If you wish for anything for us, wish Ryon good luck so that he can continue to do his favourite thing and fly on his own four feet.