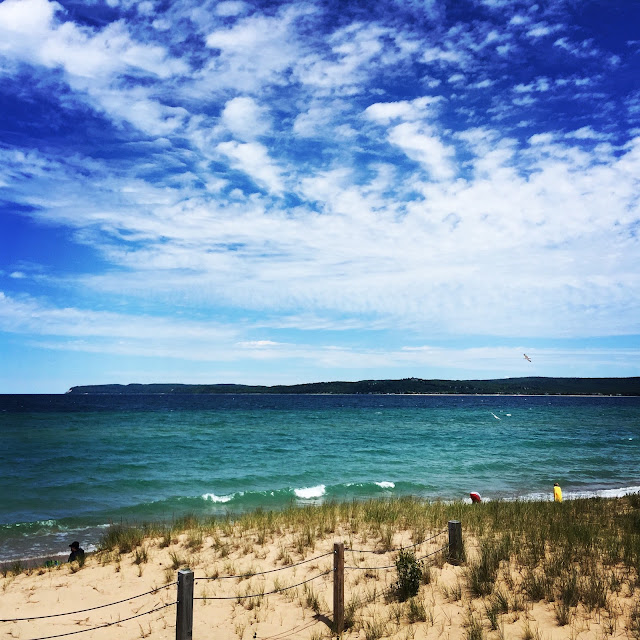 Y’all will be happy to hear that I’ve successfully earned a survival badge from our summertime adventure through the Great White North.  In true Rooth vacation fashion, there was practically zero downtime.  We were happily swarmed by the Michigan welcome wagon and jumped straight into a family dinner with B’s relatives after landing in Detroit.  B’s parents’ house is like something out of a movie, set down a stretch of long gravel driveway and book-ended by a hand carved wooden sign and a big red barn.  His parents have coffee every morning out on their large front porch, amidst hanging flower baskets and perfectly manicured flowerbeds.  However, we spent the majority of our time in their family cabin even further Up North.

Prior to making the trip, I had received multiple warnings about the cabin in the woods, which frankly started to sound like a bad horror movie in the making.  There would likely be little to no cell phone service.  It would be more than prudent to pack a jacket and long pants.  The mosquitoes are the size of birds, etc etc etc.

Upon arrival, we opened up the cabin in earnest Boy Scout-style organization with efficient and orderly dusting, vacuuming, sweeping, and mowing the front lawn as well as their walking path in the woods.  Luckily (for me), there was electricity, running water, and a full indoor bathroom that B’s dad and uncle installed shortly after they purchased it in the 80s.  Each of the bunk beds was laid out with electric blankets (we didn’t need to use them - thank goodness) and at night the temperature dropped into the 40s.  We woke every morning to a crackling fire in the fireplace and fresh pot of coffee.

You would think that with the fresh air and lack of noise, I’d sleep like a rock at night.  It turns out I’m the ultimate city girl, unable to sleep with all the birds chirping and animal sounds at night.  I’m much more accustomed to falling asleep to the roar of plane engines overhead and the dull thrum of traffic.

As true Michiganders, B and his parents played tour guide on my trip Up North.  It’s lovely to go on vacation and just show up without doing any booking or mapping out of where you’re going to go.  I highly recommend going on that type of vacation if you’re given the chance.  Among our Michigan activities included:


The Michigan countryside was spotted with immaculate farmsteads with picture perfect red barns, trusty old blue tractors.  It was a lovely break from the highways and noise / light / air pollution of the city, and we’re already planning for the next trip back, which I’m masochistically kind of hoping may be during the winter wonderland.