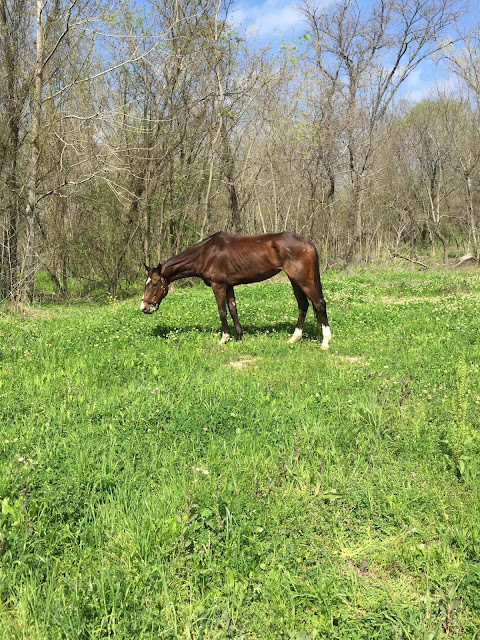 This is my baby horse now.

Since Texas went from the 60s to 80s overnight, Maeby practically dropped her entire winter coat (all over my clothes and tack) in the period of two weeks.  I’ve used this shedding block on all of my horses, and it works wonderfully and doesn’t seem to bother them.  I probably removed half of her body weight in just hair alone, which was okay because she’s actually been gaining weight at a healthy rate - around 50 lbs so far.  She is currently on her fourth jug of canola oil and starting to look less like a bag o’ bones.  You can barely see her ribs anymore and her hips are jutting out less and less.  It’s only when she stands next to the other horses in our herd, particularly our beefy, bay warmblood pair, that she looks really shrimpy again.  I try to remind myself that she’s turning five in April (none of that thoroughbred January birthday nonsense for me) and she still has years of filling out left to do.  We may see a growth spurt out of her yet!  Last week, my trainer gave her a spa day, clipping her ears and trimming her mane, and combined with her weight gain, she’s starting to look like a real horse now.

For comparison's sake, this is what she looked like when she came right off the track last fall. 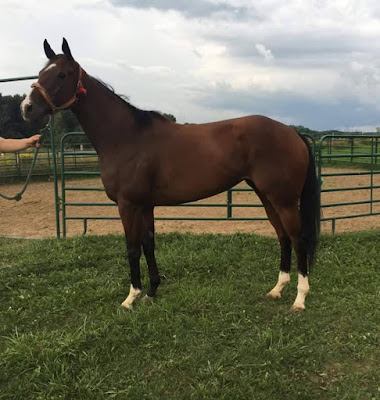 In case any one is curious, this is the list of supplements that Mae is currently on and what they’re for:

She’s gotten less picky about eating her grain, even though we continue to throw more things into it.  I’m optimistic that we’ll be able to pull out the omeprazole and Farrier’s Formula by this summer.  My wallet will be happier for it as well.

On the weekends, I’ve been taking her out into the fields to graze since the horses don’t have any grass in their tiny turnouts.  Last weekend in a moment of boldness, I let her off leash and wandered away to see how she’d respond.  She stuck close by for around five minutes and then started grazing further and further away from me.  After about 10 minutes, she had had enough of eating in the field far away from any of her herd and took it upon herself to walk home.  I slowly caught up to her and rehooked the lead; we may not be performing that particular trust exercise for awhile.

I haven’t had a lesson on Mae since January and have only been hacking her without instruction.  My IRL job tends to get busy in February and March.  Despite her illness and lame leg, she was still getting training rides from my trainer on a twice weekly basis.  The good/bad news is that she is getting hyper again under saddle, which I’m taking as a sign that she’s feeling much better.  She is naturally very forward and heavy on the forehand.  Even being fast, her transitions from trot to canter are much more fluid and less frantic than they were two months ago.  Her canter has also evened out very nicely, pace-wise, and is more balanced than it was when she arrived.  I’m still two-pointing at the canter but hopefully will be able to sit down soon (not sure my thighs can take it much longer).  She is still wobbly when it comes to the trot - varying between very slow and very fast trotting with very little consistency - as if she’s treating it as a transition gait between walk and canter.  She also tends to lean more into the bit at the trot as well.  I’m curious if this is just not being able to balance herself at the trot well enough.  We are continuing to build up her topline, and I’m hoping that her balance will improve as she gets more muscled up in her neck and back.

On Wednesday, there was a little stray dog roaming around by the outdoor arena.  Although Mae was looky and on high alert, she didn’t spook or pull her head up when I encouraged her to walk on by.  I have to remind myself that she responds better to leg cues rather than rein cues, which is part and parcel of learning how to ride a new horse.

Since I fully believe and subscribe to the KISS methodology, we only have three things we’re going to focus on for April:

Standing still at the mounting block

She’s a smart girl so I have no doubt she’ll be able to manage the first two quite easily.  And we’re on the path toward a fat Mae!