This Saturday, Mae and I had a come to Jesus moment.  To borrow Nicole’s phrase, I had had enough of the horse bullshittery, and the end point had to come before one of us killed the other one, on accident or otherwise.

Mae has been at our barn for almost four months now and dropped the majority of her long, Michigan-winter coat, which had been hiding a very thin-skinned and opinionated mare.  As she feels more at home, she’s starting to get more comfortable with the routines, people, and activities and testing her boundaries, with people and her paddock-mate.  You know, like a raptor from Jurassic Park. Post-sweaty ride on Saturday, she let me know that she did not appreciate me attempting to rub out the sweat marks behind her ears with a curry comb by yanking her head up and away, as well as giving me a rolling, crazy side eye.  So obviously, I pulled her head down, to which she responded by yanking it up more violently and even higher.  This back-and-forth exchange took place a handful of times, and after some loud, stern words in her direction, she quickly and nervously backed away from me, snapping the cross ties in the process.  It was the second time that she’s snapped cross ties with me and the third time since she’s been at our barn.

I caught the lead rope (this behavior again; I am not letting her spin around and run away from me if I can help it) as she backed down the aisle.  Knowing I wasn’t going to win the tug-of-war contest, I backed out with her, forcing her backward out of the barn, past the eurowalker, through rocks and gravel, and behind the manure pile.  Once outside, she thought the pressure was off and tried to sneak a mouthful of grass, which merited a yank and a very stern (but not yelling) talking to.  I lectured her, like you would a child, for five straight minutes and did not relent until she showed contrition / submission, putting her head down and licking and chewing.

After we had both calmed down, the blood had stopped boiling in my ears, and I suppressed the waterworks that were threatening to burst, I led her back into the barn, tied her head to the wall, and picked up where I left off grooming, and yes, even brushed behind her ears.

I have written before on my blog and in your comment sections about the prioritization of safety for riders and their horses.  Mae’s nervous habit of pulling her head up and back has got to be curbed before someone gets seriously injured.  It’s how I busted my finger when she stepped on her own lead rope and scared herself.  This time she more or less wrenched my arm out of the socket.  In order for her to stay at our very large and very busy barn, Mae will need to get accustomed to other riders, different groomers, and a variety of stimuli.  Some of you probably disagree, but she is not allowed to decide what she can and cannot run away from on the property.  Sensitive thoroughbred that she is, she knows when she’s done something unacceptable - and usually before she even does it.  Not once during the exercise did I hit her; raising my voice on its own seems to heighten her nervousness.

I am more convinced than ever that her face has been routinely smacked as punishment.  Knowing this, I’m working on desensitizing her to sudden movements around her head and people touching and rubbing her muzzle - mainly with treats and rewarding her when she puts her head down for this.  Mae’s a smart horse and has so far settled down a bit but the desensitization will be a focus until she understands that no one is going to beat her.  The silver lining (because all of us horse people have to find the silver lining otherwise we'll go absolutely insane) to all of this behavior is that she’s obviously feeling better, health-wise, because she’s back to being the energetic kiddo-raptor, I mean horse, that she is. 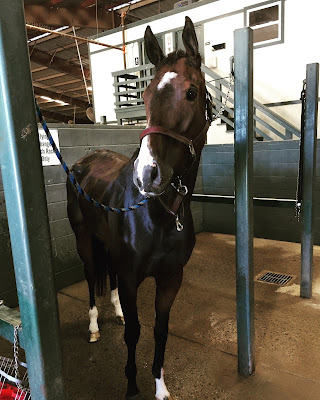