Walk in the park

In the South, summertime means beating sunshine, stifling humidity, and sweating.  In the North, summertime means eating and drinking outdoors whenever possible, sunbathing on an emerald lawn, and evenings that look and feel like daytime.  This past weekend, we escaped from the suffocating heat in the South and took a trip up north for Bryan’s first trip to NYC to do just those things.  The forecast had called for rain but instead we got a cloudy, cool 70 degree day, which I welcomed with open arms. 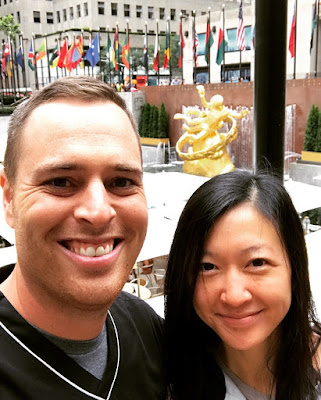 I had somehow persuaded Bryan to join me in visiting my old friend the Metropolitan Museum of Art by baiting him with a stroll through Central Park on the way.  It was the best weather to be walking around the city and people watching.  Most New Yorkers must have felt the same way because the fountains at Central Park were lined with people, and a lot of the city was wrapped up in World Cup mania and kicking soccer balls in the available green spaces. 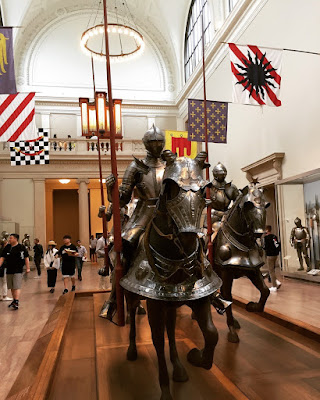 The last time I had visited the Met was in 2006, and it never fails in impressing even the most uninterested patrons.  The exhibits are always precisely curated and the building knows how to show off its open atriums and large exhibition spaces.  The Costume Institute’s “Heavenly Bodies: Fashion and the Catholic Imagination” exhibit was on display in the Medieval Sculpture Hall and was about as dramatic as you’d expect it to be after the hubbub around the Met Gala - it was beautifully shown and the space was perfect for it.  Bryan’s favourites were the Egyptian exhibit and the Arms and Armor exhibit which are the old faithfuls of the Met.  He was entranced by some Van Goghs in the European Paintings galleries, and we ran through the last part of the museum trying to find View of Toledo (my favourite painting).  Both of us left the museum knowing that we hadn’t seen it all and promising that we would have to come back again someday.

Bryan’s cousin lives in Brooklyn, so we took the subway down and spent the afternoon hanging out with her and her boyfriend, wandering around the waterfront.  Having tour guides take us to their all-time favourites - Grimaldis and hipster bars - is the best way to see a city, in my opinion.  All told, we walked 11 miles that day and the only souvenir we picked up were black & white cookies, nabbed from an upper east side deli.

In conjunction with the trip, I dropped Bowie off for his first overnight boarding experience at the vet’s office.  I won’t say I wasn’t a little concerned as to how he’d react to being taken, but he pulled the handler away from me, en route to inspect new smells, and my concern evaporated just as quickly.  The vet emailed us a few pictures of him while we were gone, and he didn’t look too thrilled about being left behind but he looks just as grumpy when you wake him up from a  nap as well.

It has been way too long since I’ve done a quick weekend trip like that and even though it was tiring to spend all that time traveling to get to the destination and then not stop moving once you arrive, getting a mental break and physical separation from “home” was wonderful.   You can bet that I will be on the lookout for more opportunities to run away that crop up.