A little bare out there

Where has the second half of 2018 gone??  Almost two months has flown by since we've been in the new place and I've been teaching myself about home ownership adult things like:

What days/times can you water the lawn?

How often do you need to replace an air filter?  What size is your air filter?  How many do you even have and how the heck are you going to reach the ones high up?

Owning a house - particularly one built in the 1950s - hasn't been as difficult as I thought it would be but that's also largely due to having an extremely handy partner.  Bryan's been a busy bee planting grass in our back yard, hanging a peg board in our laundry room, fixing the automatic gate, wiring the doorbell, caulking the shower, and switch up shower heads (who doesn't love excessive water pressure).  Somehow he's also made time to make sure our lawn is meticulously mowed and flower beds are watered - although there's not been much need for watering as its been monsoon season in Texas this fall.  The man knows how to keep himself busy and there are enough little projects around the house that still need to be done.  I'm certainly not complaining that he's been able to have such a long stretch at home with us.

Bowie's been entertaining himself with the squirrels who think they own the three oak trees in front of our house.  He sits and stares at them for hours, watching intently out the front windows.  He's named himself protector of the property and barked up a storm when we heard a coyote yipping in the alley the other evening.  As a replacement for his dog park play group at the old townhome, Bryan has found him a new dog play group that meets at the park every morning.  They race around, cover themselves in mud, and hunt squirrels together. 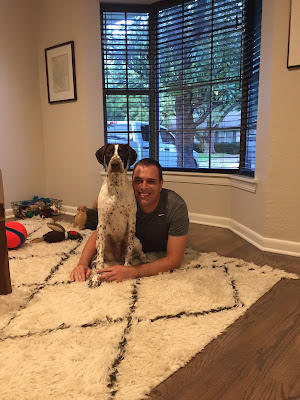 I've been slowly furnishing the house although we still have one bedroom that's completely empty and a gigantic bare front room where the dining table will eventually go.  The dog enjoys racing through the emptiness and we'll let him enjoy it for the time being.  Unsurprisingly, we've already entertained at the new house and the majority of the guests end up gathered around the kitchen which makes me oh-so-glad that it's smack dab in the middle of everything with a big center island.  No real housewarming party yet but maybe I'll get everything in order enough to throw a Christmas party.  Ugh which is probably around the time I'll write my next blog post - let's hope not right?