This past weekend, I had a lovely bout of food poisoning from some takeout that we had ordered so let’s flip back to two weekends ago when we had our last set of northern family roll through Texas for a visit.  It was Bryan’s younger brother and wife’s first trip to Texas and we were determined to make Texas converts out of them.

It’s not hard to do this time of year since in Michigan, it’s still below 60 degrees and raining every day, while we’ve got sun and 80 degree temps for days.  The wildflowers were also out in full force and for some reason, the bugs were all hiding as well.  With brilliant weather in hand, we spent a long weekend taking them around the city.  I grew up in Dallas and it’s been a really long time since I’ve played tourist in my own town.  Let me extol the benefits of being a visitor in your city:

Only the good stuff please!  Since we have done most of the notable things in our city, we only had to take our guests to see the best of the best of the best.  We took them to the Fort Worth Stockyards, which Bryan thinks is one of the most quintessential Texas things in North Texas.  For all the Texas eats, we took them to Bryan’s favourite barbecue place (Cooper’s in Ft. Worth) and favourite crawfish place in all of Texas, excluding Houston (Nate’s in Addison).  Bryan and I definitely disagree when it comes to what is The Best in those categories, but hey, it’s his family and his agenda.  Because Bryan had already taken his other visiting family members to these places before, we didn’t have to muck about with not knowing where to park, when to avoid lines, and what to order.  Line waiting was minimal and we were able to cruise in and just enjoy.

You’ve taken it all for granted!  As a Texan, you’ll take it for granted that people do actually ride horses everywhere and anywhere (been that person), longhorns are plentiful, and the Tex Mex food is pervasive and delicious.  Seeing a longhorn was on Bryan’s sister-in-law’s bucket list, so we stopped to watch an entire herd of them lumber down the street.  Every shop that we went into in Ft. Worth had a bar - serving margaritas no less.  We went to the Mexican market around the corner where you can get pre-marinated fajita meat better than anything I’ve had in a long time.  Highway interchanges with flyovers tower over the landscape and yes, you can see for miles and miles and miles in every direction if you only gain five stories of elevation.  The flags here are bigger than anywhere else in the U.S. and the Texas flag flies just as high as the stars and stripes. 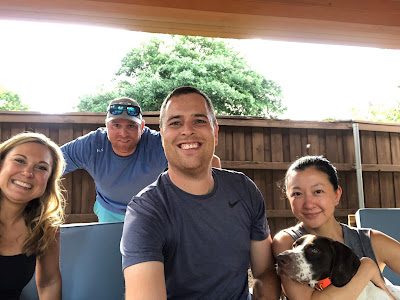 They love on your fur family!  When family comes to town, they love your annoying dog, and your dog loves them right back.  They indulge him with his favourite game of tug of war and give him big hugs every day.  They also love your horse, and your horse tolerates their hugs and pats for treats.  They’ll even spend half an hour in the broiling sun watching you hack her in the outdoor arena.

Our visitors have already told us that they’d like to come back and see more of the countryside next time.  I’d like for them to return so we can go to Austin - Hill Country is certainly different from North Texas and there’s so much more to eat and see there as well.  Just not in July or August please?