It’s funny how my trainer and I were just talking about how wonderfully Mae is doing since she’s been with us, how she’s matured and is sane to ride at any time, how her topline has muscled out, and how nice her hooves look.  She’s eight now and settled down quite a bit since we got her.

So of course, this summer she started giving us colic scares, starting in May with what we thought was a gas colic.  It’d always happen after dinner in the evenings on particularly hot days.  After her last meal, she would start acting restless in her stall, trying to get down and roll.  Initially, we thought maybe she was getting overheated or ate her grain too fast.  We would hose her down, dry her off, give her a shot of banamine and she would perk up immediately.  Once back in her stall, she’d try to hoover any remaining scrap of hay that was left after we removed all food and poop / pee regularly. 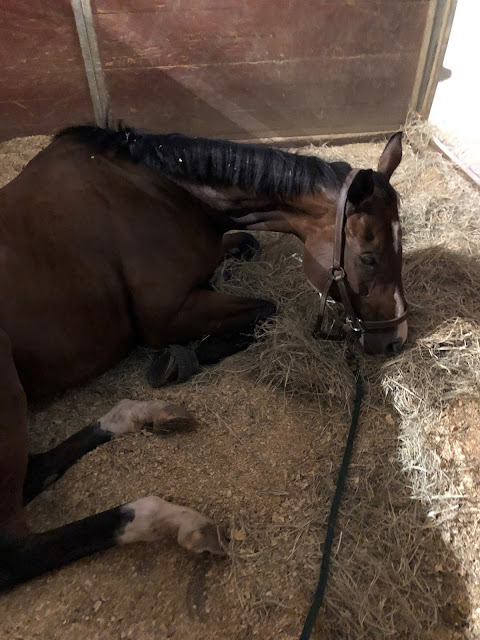 Not feeling so good, mom

It got to be so that this was happening regularly, every three weeks or so.  After her last bout in July, my trainer and vet suspected ulcers so I ordered two weeks worth of omeprazole (in case that wasn’t what it was, we didn’t over-order medication).  Since she’s been on the paste, she started eating a lot more and pooping a lot more frequently.  I ordered the second shipment of medication after she had been on it a week, but due to the shipping delays at the USPS, her medication didn’t arrive until she was off of it for four days.  During that four day period, she had another fit and after yet another injection of banamine, she looked right as rain.  Unfortunately, instead of bouncing back the next day, she was back to not eating and laying down in her stall.  At one point, she lay down right outside of her turnout and had all of the kids at the barn in a tizzy - afraid that she was on her deathbed.  I know I shouldn’t laugh but this is almost the exact same thing that happened four years ago when we first got her off the track. 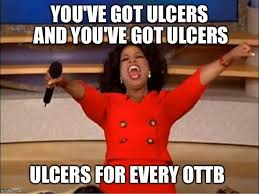 Luckily at this point, Mae was finally back on medication.  We took her off grain feed completely and put her on soaked alfalfa.  She also gets different hay now as well.  Five days later, she’s back to normal.  We have three more weeks of omeprazole paste and then we’ll put her on a daily powder.  As I mentioned before (and if you've been following along for that long), this is her second time with ulcer flare ups.  The first was when she first came to Texas from Michigan (read here) in 2017.

Every time we’re learning something about her and the ideal diet for her to be on.  Thoroughbreds and their highly sensitive stomachs, amirite?  Eventually, I’d like her to be on pasture but that’s not feasible right now with where we live and where my trainer is.  I'm also not even sure if that'd help her stomach issues.  Do any of y’all have ulcer issues with your ponies?  Do you have to switch up diet / supplements to stay on top of ulcers or have you found something that works?