The horses have landed

Trainer and I got a text on Thursday morning - Happy St. Patty's Day and the horses have arrived to NY and unloaded nicely!  And then we got pictures!  It sounds silly but I was so relieved to finally get pictures of them during the shipping process.  There was an irrational niggling in the back of my mind that we were just going to get two pencil drawings of horses with Horse 1 and Horse 2 on them.  But they're in the States now.  And they're real! 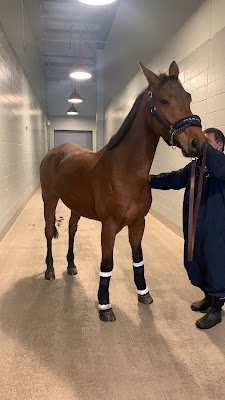 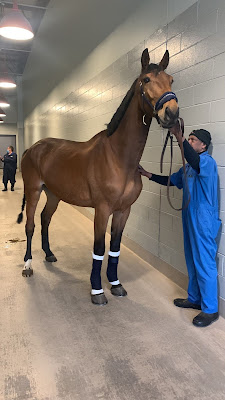 They're currently in quarantine and get released this weekend (hopefully).  They don't arrive in Texas until next week but we're so ready for them.

So finally, some details about the horses, since I've been accused of keeping secrets.  My horse (eeks!) is a four / coming five year old Zangersheide.  He's the very tall one in the photos - they're both brown, go figure.  He was bred in Belgium and his registered name is Dalton Van De Kaai Z.  He's out of Da Vinci DC x Heli Van De Kaai Z (by Houston).  Both dad (Holsteiner) and mom are competitive on the showjumper circuit in Europe.  He's been brought along slowly - a lot of flatwork and trail - and we intend to keep his development slow to let him fill out his HUGE body.  He looks like an absolute sweetheart with lots of try over the fences, which he makes look small because of his size.  In anticipation, I've dug out all my old "warmblood size" tack that I had used for Ryon and kept.  Thank god for tack hoarding, right?

My trainer's horse is a 16.1H, five year old Czech warmblood.  He is an adorable jumper who has already shown up to 1.0 meter with amateurs in Europe.  He is very cute and has a forward ride - I'm excited to see how they do on the show circuit together.
That's the horse update for now!  I'm sure I'll blather away some more when they get to the barn, but I'll have heart eyes until then.
Labels: Animalific