Over Memorial Day weekend (which now seems so long ago), I lost an earring, climbed a mountain, and bought groceries from a convenience store located in a mobile home in west Texas.  JR drove (I passenged - yep, new word) the 8+ hours to the desert and the highest mountains in Texas.  Live tweeting the road trip with #westwardho was probably the most exciting thing about the car trip, although the slick roads and reckless eighteen-wheelers made for a dicey adventure at times.  Forget oil / electricity / natural gas, the car could have probably been powered by our sugar rush alone, fueled by too many bags of Swedish Fish, gummy bears, rolos, and twizzlers.  The heavy wet clouds that have been hanging about north Texas for far too long cleared out about the time we reached the desert and the blazingly clear blue sky set off the rugged, rusty Texas mountains in a John Wayne-movie kind of way. 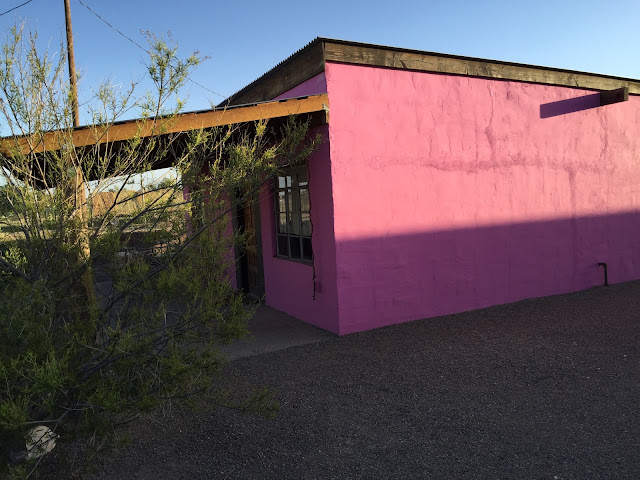 In the desert, we stayed in a teensy tiny farming community, population of 400, complete with cow crossing signs pegged at one mile intervals (note: we saw no cows in said city).  The casita we rented through Airbnb was part of a grouping of low slung adobe buildings, each painted a too bright colour which surprisingly played nicely against the muted pastels of the desert.  A hiking club joined us during our stay, their tents scattered along the porch and flapping about at night.

To say that our host was a fan of religion-themed art would be like saying the weather lately in Dallas has been a little bit damp.  JR and I both agreed that if we saw the eyes of the oil-painted angel shift, we would be packing up the car and staying in El Paso for the remainder of the weekend.

Over the weekend, there was no tv / cable, no internet service, and spotty cell reception.  With only one “restaurant” in the town, we ended up cooking eggs and eating Cool Ranch Doritos for most meals.  We fell asleep before 10 pm every night and one morning, I woke up to a rooster crowing at 4:30 am, grabbing a few sunrise shots for my troubles.  The silence and isolation was not deafening but instead refreshing.  I didn’t even end up reading much of the books that I lugged with me and stared at the sky, the mountains, and the cacti instead.

*JR had to keep reminding me not to hug the cacti.  Don’t they just look like they need a hug, though?