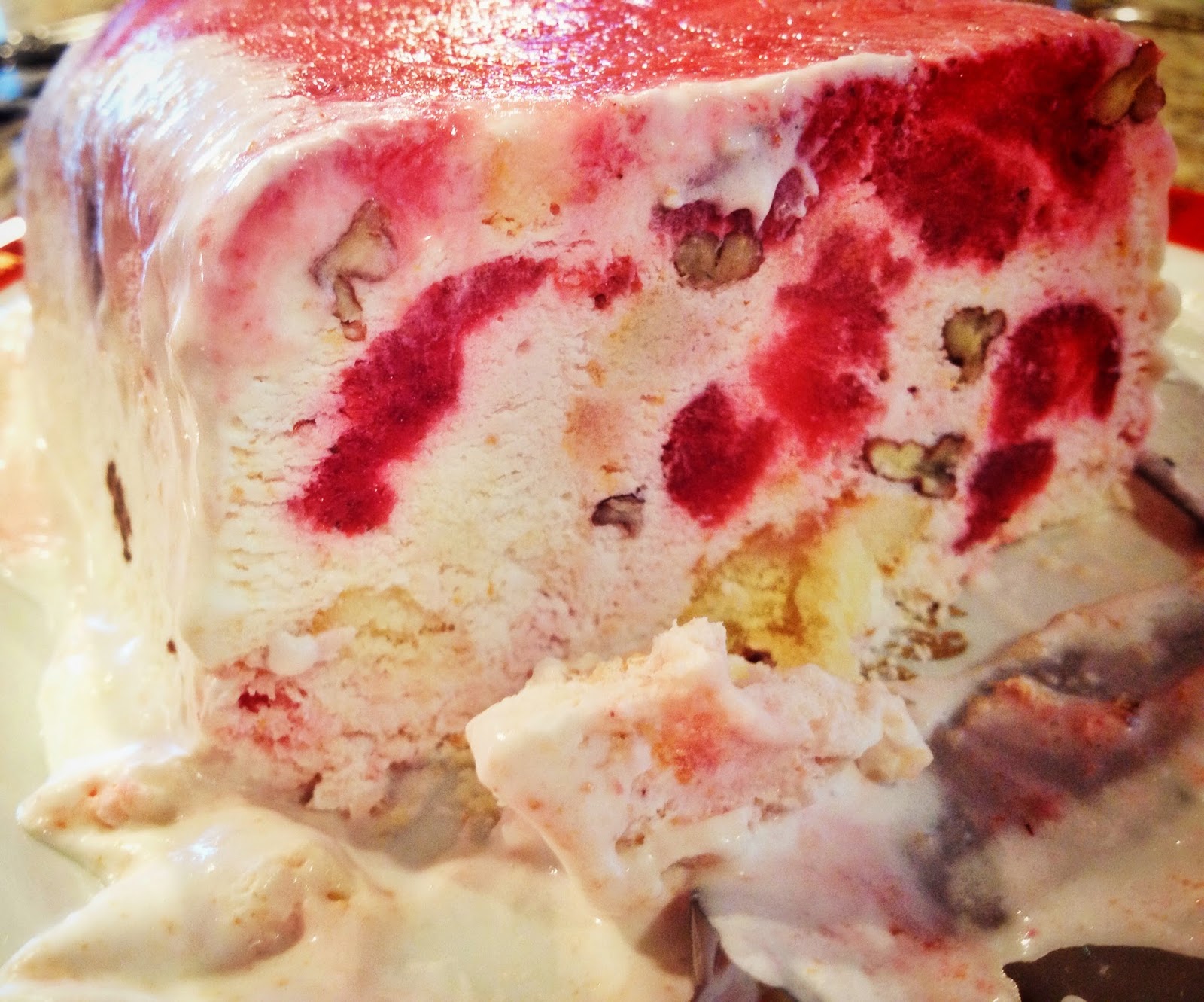 Sympathy weight - oh it’s a real thing alright.  In bulking my mom up five pounds (in less than two months), my dad and I have probably collectively put on double that much.  The best thing to have for dinner is company, right?  And we’re not doing physical rehab with intense cardio three days a week.  Well, I know my dad isn't...

I served this strawberry icebox cake back over July 4th weekend at my parents’ dinner party and for a group of “old folks” that were purportedly not fans of dessert or sweet things,  they enjoyed it immensely.  So much so that I had made two cakes and they finished both of them.  Even enemies of dessert and those who claim not to have a sweet tooth can be vanquished by a simple frozen treat that requires zero baking.  No need to turn on the sweatbox of death during these stifling summer days.

Mixing is really key to this recipe and allowing the fruity, buttermilky, cookie goodness to get all muddled up with one another during the freezing process.  This means lots of trips back and forth to the freezer.  But it also means lots of dirty spoons and lots of tastings in between.  Silver lining, folks.

Adapted from Strawberry Delight by Matt Lee and Ted Lee

Put the strawberries, 1/3 cup sugar, and 2 tablespoons of water in a small saucepan and cook over medium-low heat, stirring occasionally, for 20 minutes, until the syrup is glossy red but still runny. Allow to cool for 20 minutes.

In a large bowl, whip the heavy cream with the remaining 1/3 cup sugar and the salt until peaks begin to hold their shape. Fold in half-and-half, buttermilk, cookies, and toasted pecans until evenly combined.

Line a 3-quart loaf pan (or two 1.5-quart loaf pans and divide cream mixture evenly) with plastic wrap and pour the cream mixture into it. Then pour in the fruit and syrup from one end of the pan to the other, but do not stir (if using two pans, divide the fruit and syrup evenly between them). The syrup and fruit may float on the surface at first but will gradually sink through to the bottom. Lightly cover the loaf pan(s) with plastic wrap and place in the freezer until a cap of crystallized cream has formed about an inch thick, about 2.5 hours (or 1.5 hours if using two loaf pans). Use a broad serving spoon to break up the cream and fold the ingredients together, taking special care to lift the strawberry pulp up off the bottom. With the back of the spoon, smooth the surface and return the pan to the freezer for 1.5 hours (about 45 minutes if using two pans). Fold again, freeze for another hour, and fold a third time (if using two loaf pans, you might not need to do a third fold). Allow to set for an hour more.

To serve, turn an entire loaf upside down onto an oval platter and slice off individual portions with a knife warmed in hot water.