While the haze of Mae’s illness and gradual recovery has been hovering over us, life has been continuing on in its usual fashion.  There have been other non-horse things and forward progress in things other than her recovery (more on that later, a lot more).  Recently, I’ve made a foray into DIY territory and ended up with this to show for it. 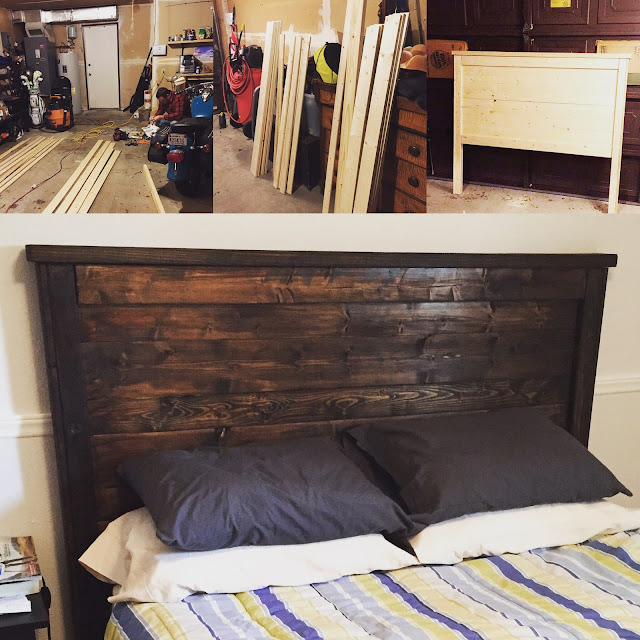 Watch out Chip and Joanna Gaines - we’re coming for ya!

When B moved down to Texas from Michigan, he loaded everything into his a truck and drove south.  Over two years later and he’s still failed to amass any real furniture so, after I dissuaded him from buying a bedroom set like a toddler, we decided we would build him a headboard.  From scratch.  Using pine boards, a nail gun, wood glue, and wood stain.  I haven’t built anything that wasn’t from the great forests of IKEA but the Great and All-Knowing Internet provides, so after a few hours of googling, we found something that we both (found tolerable) liked.  Specifically, this plan for reclaimed-wood, queen-sized headboard by Ana White.  Weighing in at beginner level difficulty, it was right up our (my) alley.  We spent one chilly evening putting it together in the garage, dragging in one of the lamps from their living room when we didn’t have enough light and where I couldn’t possibly layer on enough flannel to stay warm.  The trick to staying warm is to wear a hat / beanie which is the first thing that I learned about woodworking: dressing and looking the part is paramount.  Below are a few other pointers that I picked up along the way.

Tip 1: Gather the right tools.  The nail gun from Harbor Freight saved us countless hours of hammering the trim pieces together.  Tip 1a: Make sure you know which end the nail comes out of before you end up nearly shooting yourself in the face.  Tip 1b: If you don’t have the right tools, be resourceful.  We didn’t have sawhorses so we ended up using B’s Yeti cooler (aka most expensive sawhorse ever) and a folding chair on the other end.  It wasn’t exactly level but it was good enough.

Tip 2: Buy good quality, un-warped, very straight pieces of wood.  It’s worth it to spend a little extra time at your hardware store culling through and looking the pieces over.  The top piece of our headboard, which is also the thickest and longest, is slightly torqued and we ended up having to screw it into the rest of the back to make it flush.

Tip 3: Measure twice (or three times) and cut once.  We did this and only ended up with one slat that was a bit longer than the others.  It still ended up working-ish, and the trim on the sides ended up covering up the gaps.

All in total, it only took three hours to put together, one hour to stain, zero trips to the emergency room, one trip to the pizza parlor, and only three separate trips to the hardware store to get it all done.

Before we stained the headboard, we sanded the entire thing down by hand.  We weren’t going to be finished until we sprinkled a thin, fine layer of sawdust over everything in the garage, like the Texas version of snow.  Staining was done on a separate day WITH the garage door open and a variety of different sponge brushes.  What you see is a dark walnut stain with only one coat.  Neither of us had the patience to slap on a second one after the first had dried.  After bolting the headboard onto the bed frame, we spent the first night in B’s new bed inhaling wood stain fumes and waking up with dry throats and headache.  Which leads to...

Tip 4: Air out anything you stain for as long as you possibly can.

The things that you create with your own hands may not be as beautiful or symmetrical or flawless or non-toxic as what you can buy in the store.  Instead, you’ll get a homemade work product, a story, and maybe even a blog post out of it at the end.