I survived! seems like an odd way to describe the end of the holiday season but right after December 25th, it seemed as though we and the house had just gone through war with Christmas.  Bryan's sworn enemy - glitter - was scattered all over the hardwoods and wrapping paper and packaging boxes overfilled the garbage.  We celebrated both Christmas Eve and Christmas Day at our new house with family and grabbed this gem of a picture on Christmas morning.  I am 100% doing Christmas pajamas as a new annual tradition. 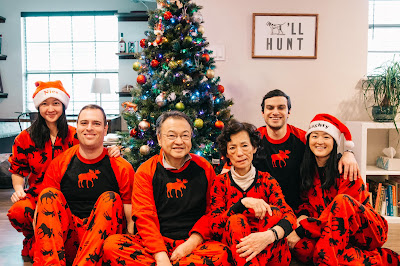 The undisputed winner of Christmas was Bowie.  He did NOT have to wear Christmas pajamas and still made out like a bandit with the treats and toys coming from all of our friends and family.  He also made the "front cover" of our Christmas card with this face, which received lots of laughs from friends and family after they received the card.  We'll have to figure out some way to top it next year, although I have a sneaking suspicion that he'll still be naughty in 2019. 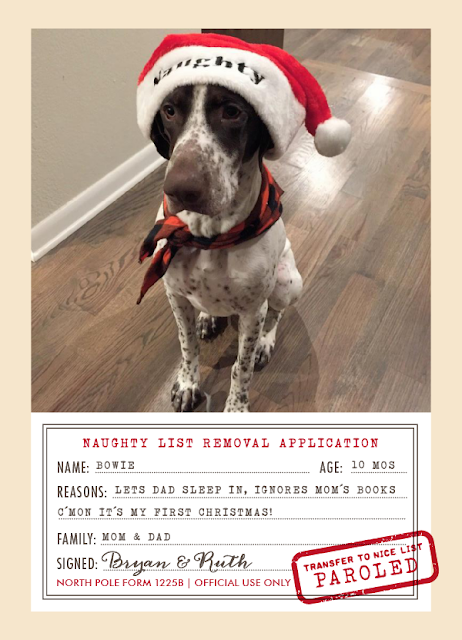 As 2018 was a rough "work" year, I spent the last two weeks of December focused on getting a lot of rest, catching up on reading, and staying very warm.  I ate more than my fair share of cheese and we hosted a birthday / housewarming / ugly sweater combination party.  I made my first signature cocktail for the occasion - this bourbon, orange and ginger smash hit from Food52.  A useful tip for big parties: when trying to feed everyone, order food instead of making it.  We had pizzas delivered for the ugly sweater party from a local pizzeria and everyone loved them, especially the vegetarian one!  It allowed us to focus on the guests instead of rushing around making sure food was hot and put out at appropriate intervals.  Couple that with disposable plates and utensils make for very easy clean up as well.

Even though we did order food a few times, there was still boat loads of holiday cooking.  Maybe even more than over Thanksgiving as we had to make up for Siri and her fiance missing it all.  We smoked ribs and baked a vegetarian moussaka (recipe from Epicurious) for Christmas Eve that took a little bit longer to prep but was worth it.  The eggplant, which is the meat stand-in, is sweated, baked alone, and then baked within the moussaka so the end result is a non-soggy dish.  On Christmas morning, my mom brought over pre-made xiaolongbao and vegetarian dumplings for brunch which were also a hit.

Taking it easy was an absolutely idyllic way to spend two weeks and made me wish I had one every couple of months.  Unfortunately now it's back to the regular scheduled programming.  We were supposed to have a winter storm here in Texas to kick off the new year except we can't even do that right so it's just freezing cold rain right now.  Despite that, I'm looking forward to 2019 and the fun we'll have this year.