I’m back!  Which is a strange thing to say since you didn’t know that I was gone.

We went to Italy!  It was Bryan’s first time in Europe and both of our first times to Italy.  After brainstorming for weeks and weeks on where we should go this fall, we finally decided that Italy would be the best mix of history (for him), food (for me), and weather (for both of us).  We were gone for 8 days, with half our time spent in Rome and the other half in Florence.

We grabbed a direct flight from Dallas to Rome and landed in the early morning.  In Rome, we stayed in an Airbnb the neighborhood of Trastevere, west of the Tiber River and we were told that it is “quintessentially” Roman.  All of the extremely narrow streets are paved with cobblestones and seemed to wind in every which way.  We had a driver pick us up from the airport and we were both shocked that he was able to squeeze his van along those tiny streets.  Travel tip: we booked Airbnbs throughout our Italian trip and were really happy with the apartments and locations of all of them.  They can also be more affordable than hotels.

On our first day, we had a scheduled reservation time at noon to tour the Colosseum and Roman Forum.  What I did not anticipate, even after reserving a time, was waiting in line for over an hour to get into the Colosseum.  There were tour groups galore from all different countries speaking a multitude of different languages.  The temperatures were in the mid-80s and by the time we were into the Colosseum, I was more relieved to be in the shade than excited about walking around the Colosseum.  We were allotted an hour to walk around and used a Rick Steve’s audio guide for a DIY tour.  Travel tip: book your tour time for either early in the morning or late in the evening to avoid the rush of tourists and the heat. 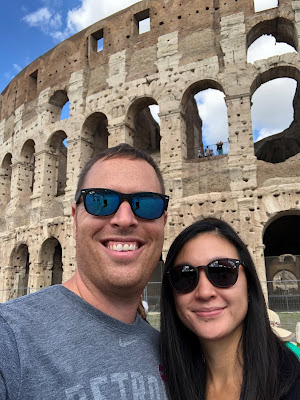 After the Colosseum and right next door, we wandered over to the Roman Forum which is equally impressive if not more grand.  By this point in the afternoon, I was mosquito bitten (those suckers can find me anywhere), sweaty, jet-lagged, and tired from walking around for over four hours.  I found myself a nice large rock (or part of a ruin) to sit on right next Julius Caesar’s grave and let Bryan wander around the last 15 minutes by himself.  I was more entertained people-watching amidst the ruins than reading the plaques dotted around the forum.  That evening, we grabbed an early dinner back in Trastevere and ordered one of those iconic meat & cheese boards that you see so many pictures of.  The shop owner was welcoming and warm and everything we ate was delicious.  We capped off the night with gelato - of course - and wandered around the neighborhood, watching all the street performers and perusing the vendor booths selling silver and leather goods.

The second day in Rome we walked to a few different tourist sights, including the Trevi Fountain, Pantheon, Spanish Steps, and the outside of Vatican City, again guided by our Rick Steves book.  In the evening, we did a four hour food / drink walking tour in Testaccio, which is one of the “newer” neighborhoods in Rome - meaning circa 1800s.  The tour took us to five different restaurants, where we sampled a different course at each location.  One of my favourite things picked up from the eating tour was learning about the aperol spritz, a refreshing pre-dinner cocktail that is a little more bitter than it is sweet.  I highly recommend the walking food tour in Rome and would really like to do one of these in every international place we end up visiting.  We learned so much from our Roman guide about Roman cuisine and culture as well as the history of the neighborhood / city that we walked through.  We used Eating Europe - link here to the tours we looked at and booked (https://www.eatingeurope.com/rome/).

The first two days flew by in a flash with getting accustomed to the time different and trying to pick up on the language.  On day three, we left Rome for Florence via train (one of Bryan’s favourite parts of the trip).  I'll pick up the second half of the trip with a second blog post.  And if you've been to Rome before, let me know what your favourite part of the city was.