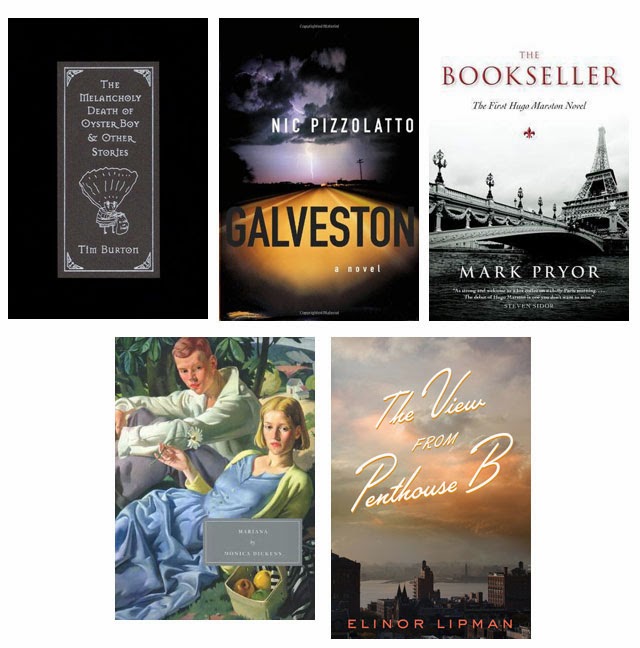 Gulp, you know you've fallen way behind when you're posting about April and May reads and it's July.  I have far too many books to catch you all up on so I thought I'd pick the best of the best from April and May buuuuut if you're interested in hearing about the others, feel free to check out my Goodreads account.  And now, on to the books!

The Melancholy Death of Oyster Boy & Other Stories is a collection of poems and illustrations by Tim Burton and it is delightfully nasty and horrific - eerie but beautiful, much like everything else Tim Burton does.  With titles like "The Boy with Nails in his Eyes" and "The Girl who Turned into a Bed," you know that you're going to laugh and shudder simultaneously from cover to cover.  I've already gifted my copy to a friend but it would be perfect for the fabulously freaky people in your life.

Galveston is a book that's popped up on many "to read" lists that I've seen recently, mainly because the author Nic Pizzolatto is also the creator and executive producer of the show True Detective.  I was curious about how the city of Galveston would be depicted in his thriller / crime novel, mainly because my memories of the city are of a dreary, bomb-shelled beach town still recovering from the damage of Hurricane Ike in 2008.  It's so easy to ruin a novel like this with a synopsis so I'll sum it up by saying that if you like books with an unwilling and unlikely protagonist / main character, you'll enjoy this one.  I'd tell you more about my plans with Galveston (the city) but, you know, spoilers.

I've got Paris on the brain, largely due to Erin's recent adventures there (and back again) and The Bookseller does a fantastic job of selling it even further.  Hugo Marston is the head security at the US Embassy in Paris and when his friend Max, one of the bouquinistes on the banks of the Seine, goes missing, Marston starts looking into why, landing him headfirst into the seedy underbelly of Paris.  Sorry, I just had to throw in some stock book review language there.  The book takes you on a pretty delightful romp through the streets of Paris and I'm sure that I need to go there now.  To make sure all of the descriptions are accurate, right?

Mariana is a lovely little hot-water bottle book by Monica Dickens (great-granddaughter of Charles Dickens anyone?) and a coming-of-age novel of an Englishwoman, purportedly semi-autobiographical of Dickens herself.  Books like this are such comforts to me and, for some reason, surprisingly modern to me.  It shocks me that even though this book was published in 1940, it is still so relatable and refreshing.

The View from Penthouse B was plainly and simply, a delight.  Gwen-Laura is recovering from the death of her husband when her sister invites her to "bunk up" with her in her Village penthouse in NYC.  When happens when you put two "older" sisters together with no money in NYC?  Pure comedy.  And when Gwen-Laura starts online dating?  My goodness, is all I'll say.  Deep down, this is also so cliche, this book is about family - the messed up families that we have, that we make, and that we love.