We’ve been oppressed here in Texas, I tell you, suffocating under the sun’s harsh, neverending rule.  Remember that time earlier this spring when it rained all the time and wouldn’t ever stop?  Like your grandpa always says, those were the good old days.  I don’t think we saw a drop of rain during all of July.  So when offered an opportunity to run away to the Pacific Northwest, we snatched it up and never looked back.  We might have run to the airport if it wasn’t so hot and death-like in Dallas.  Stepping off the plane in Portland, the feeling of being outside and not instantly sweating in the middle of August - beyond magical.

My sister, as she did last year, played gracious hostess to myself and JR, and she surely outdid herself this time.  A welcome note, fresh linens, fresh flowers, stocked bar cart and refrigerator - is this the little sister I knew that couldn’t be bothered to clean her own bedroom three years ago?  Siri and her boyfriend took a few days off of work to act as tour guides around Portland and the surrounding areas, and as a result, we went on a beautiful hike to a waterfall and sampled one too many beer and wine flights at a multitude of breweries and wineries.  Both Siri and her boyfriend work in digital marketing (for the same company), so we got the chance to watch them work their social media magic live.  I swear, even their outfits were coordinating every damn day.

Siri lives in a very walkable part of the city and a stone’s throw from several eateries that I wouldn’t mind frequenting forever.  Almost every morning, we would go grab a cup of very respectable coffee and wander around - picking up breakfast buns one morning and doughnuts another.  One morning, it was balmy enough that we decided on a lark to trek up to the rose garden and around Washington Park in sandals.  I may have led us astray, accidentally, and gotten tangled up in a blackberry bush for my troubles.  In Texas, you’d have to drag along a liter of water just so you don’t dehydrate taking your garbage out.  However, the best part of the entire trip was watching my favourite people together talking, laughing, napping, and falling into water (sometimes separately, sometimes at the same time). 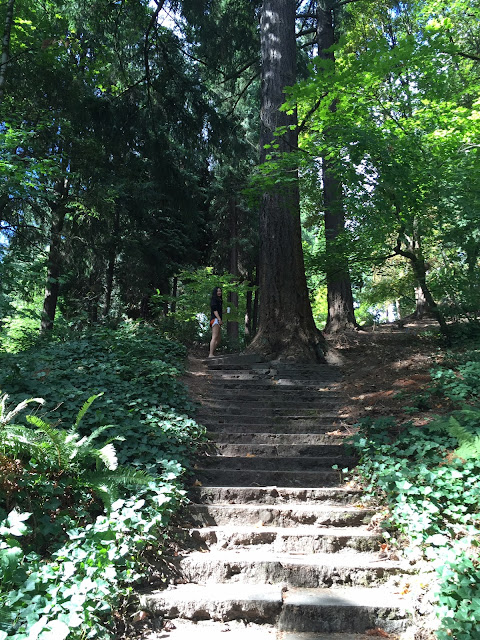 I do miss my sister, and at the same time, I’m so very proud of the grown up that she’s turning out to be.  Thank you for the teaching me to exploregon.