Hunting for banana slugs in the Pacific Northwest 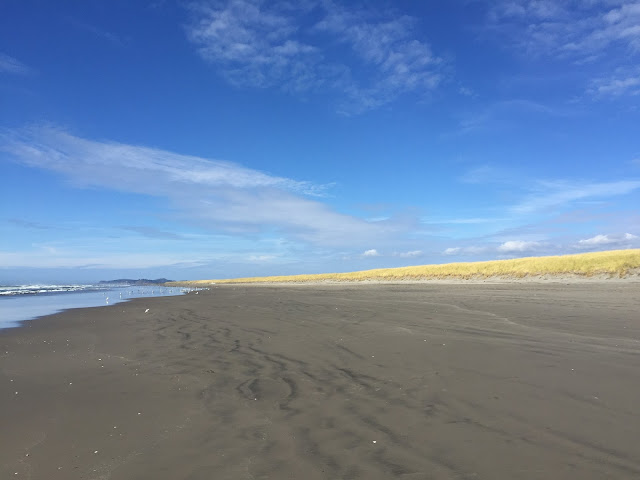 The past weekend, I made my annual trek out to the Pacific Northwest to visit my sister and her boyfriend.  It was my first time to Portland in the fall, and B and I caught it at just the right time.  All the leaves were changing colours and everywhere we went, we were greeted with beautiful patterns of red, orange, and yellow.  The weather was  drizzly and cool but brightened up brilliantly on the weekend, warm enough where we could leave the screen door open all day.

We were able to squeeze in a day trip to the coast during the weekend on one of the gorgeously sunny bluebird days.  The slumped over bow of an old shipwreck lies on a beach at Fort Stevens near Astoria, so we thought we’d visit the rusted out hull, maybe find some pirate's treasure.  The shell of the boat itself was surrounded by tourists when we got there (tetanus shots people!) so we took a walk along the beach, which was one of the nicest ones in the continental US that I’ve been to.  The sand is very fine, very clean, and very brown.  There were hoof prints up and down the sand, and you can also drive your vehicle on the beach.  If I had brought Ryon, we would have definitely gone for a gallop by the surf, but B and I chose to wander by the water for a few miles, unnerving all the sea gulls.

Like people do in Portland, we walked everywhere in the city - to pick up breakfast pastries, for brunch, dinner, and late night eats.  The new neighborhood my sister lives in is more quiet and serene than the hustle and bustle of the Northwest District.  One morning, we huffed and puffed our way up a five mile hike in Forest Park, which is a beautiful green space right next door.  B had heard about gigantic banana slugs that ooze their way around the area, and within the first five minutes, he found one on the side of a log.  By the end of the trail, we had to watch our every step, lest we squish them on the path.

Portland is definitely known for All the Good Eats, and of course we gorged ourselves silly.  However, my utmost favourite part of the weekend was cooking dinner at Iris’s new apartment, playing video games on their old N64, and binge-watching Stranger Things.  Anywhere I go, I find that hanging out with my favourite people, doing silly things, and eating good food is the tops!