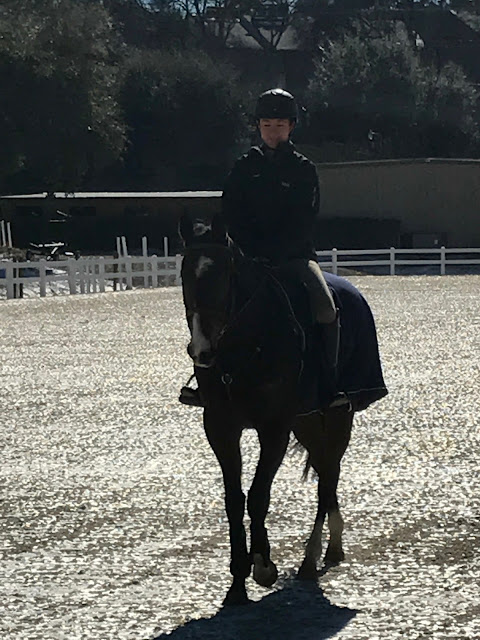 Maeby arrived on Christmas Eve, a real Christmas pony, which is only embarrassing to say when a kid half your age tells you that she got a pony for Christmas as well.  Mae (inevitable nickname) is very much still a baby horse, complete with a cute baby face and curiosity about everything.  She is very narrow / skinny and covered in long fine hair, with teeny tiny feet and tiny teeth.  My trainer jokes that tiny feet are a trait that me and all my horses share, and I honestly thought Ryon had the smallest feet I had ever seen on a horse until I met Mae.  Since you aren’t allowed to make your expensive tack work for multiple horses (sarcasm), she fits into a cob sized bridle and cob sized breastplate, as well as one of the smallest girths I’ve ever used.  At any temperature above 40 degrees, she sweats underneath her blanket which must be the Michigan in her.  So far, I’ve learned that she doesn’t care for apples but loves rolling on the ground anywhere, peppermints, and molasses cookies.  Mae is utterly convinced that every single person ever has a treat for her hidden in his/her pocket and by golly, she’s going to find it.  She has a sweetheart personality and the contrast between her and Ryon is striking (more on that later).

So far, she cross ties comfortably and grooms nicely.  She’s ticklish on her right side and getting sweat marks out of her long hair can be a horse/person two-step.  We also had warm (enough) weather to bathe her yesterday, and she grew accustomed to the wash racks very quickly after a few initial nervous poops.  With the help of some treats, I’ve already taught her how to stretch her neck on both sides and down to her chest.

When she first got to the barn, she was a pain to lead in a halter.  She’d walk in front of me every chance she got and pull faster, and I was ready to order a lead chain for her.  Fortunately, we’ve been able to teach her very quickly, by changing directions and stopping at random, to stay behind us and pay attention to whoever is walking her.  Mae is an obedient follower inside the barn, but in the great outdoors, she’s still distracted by all the newness / other horses.

Our barn recently got a fancy new eurowalker, and Mae was the only horse in our training program who understood how it worked and what it was about.  She was also unflappable when a plastic bag flew into it the other morning and kept plodding along while every other horse had a panic attack.  Right now, she’s in it regularly at a moderate walking pace, and it’s keeping her limber while also helping slowly build her muscle tone.  We have recently turned her out with an anxiety-ridden quarab, whom she protects and dotes on.  Ryon tries to bully her over the paddock fence, so they won’t be horse buddies anytime soon.

Initially Mae had been kicking out with her back feet and dancing around the mounting block, however with a well-timed peppermint, she now stands quietly while I’m getting on, finishes her mint, and waits for the cue to walk on.

She is incredibly green and very forward.  We gave Mae a week to settle into her new home and started riding her last week.  The goal is to ride her on the following weekly schedule: school twice, hack three times.  We have been limiting rides to ~20 minutes, and she’s already shown a lot of progress with the rides we’ve had on her already.  During her first week here, we were making sure she could trot in a 20 meter circle in both directions, and last week we trotted ground poles, hopped her over a tiny crossrail, and have been working on her canter on both leads.  Her last race was in August of this year and I don’t believe she was ridden regularly after, as she’s undermuscled and unbalanced.  On the plus side, Mae has clean lead changes.  She is weaker on her right side (like most off the track thoroughbreds) and can’t support herself in the canter, and so she runs out flat to compensate.  She doesn’t understand speed control either so we will be working on this as well.

And then, the veritable sh*t hit the fan...

I came home from being out of town yesterday to a completely different horse under saddle.  I took Mae out to the outdoor arena after 15 minutes of lunging and we proceeded to walk around to “look” at everything outside.  When we got to passing the tractor, which she has seen multiple times before and in the dark, she lost it.  I mean, crowhopping, trying to trot / canter away, trying to rear, etc.  I had my arms around her neck at one time to try and stay on.  After lots (and I mean lots) of trotting and figure 8s, we were finally able to circle by the tractor at the trot and at the walk.  She was still giving it tons of nasty looks, but she had finally gotten to the point where it was tolerable-ish after working herself into a lather.  On the other side of the arena, far away from the tractor death machine, she was even and balanced at the trot; small victory there and I will take it.  So why this Jekyll and Hyde horse?  When Mae arrived, she was on a purely hay diet.  After week one, we started slowly adding grain to her diet, which significantly increased the amount of protein she was used to since being off the track.  We are switching her to a different grain and keeping her on a lot of hay until we can figure out the right ratio for her.  She went from being a non-spooky horse to freaking out at EVERYTHING, which is honestly what I expected from her when I first brought her home.

If there’s any theme with the baby horse, it’s that progress will come with time, patience, and experience.  I still lose patience (too often) when it comes to the animals but it’s a work in progress, as is everything else in life.  Meanwhile, I’m going to continue to focus on not quitting and treating each day as a new day.  We’re going to try this all over again today.


*When I use “we”, I’m referring to myself and my trainer.  I’m lucky to have a trainer who’s supportive of my crazy ideas.