And all of a sudden, Mae’s been with us for half a year.

Lately I’ve been missing from the blogging world because work, work, and work travel.  Work took me to Paris and London last week, just in time for the hottest days this year, which is a wonderful change from their typical chilly, breezy weather.  But let’s talk about that later and talk horses first. 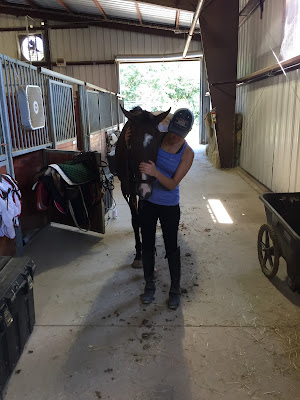 We’ve had our turnout at the barn reduced because they added a new trainer this summer and bring all of her horses and clients.  Now the number of turnout paddocks we have are proportionate to how many horses each trainer has in her program.  As a result, none of our horses go out alone, and my trainer has tried to pair Mae with each of the horses under her program, only to have poor Maeby bullied by each of them.  She’s the youngest of the group by far and chases each of the horses around the paddock to “play.”  They quickly tire of her antics and bite her until she leaves them alone.  The only horse tolerant and patient enough for her is our 19 year old pony, so it’s with him that she goes out during the day and night.

My vet also injected her hocks last week, while I was out of town.  When I came back this weekend, I turned her out in the big outdoor arena and let her run (does she run!) and stretch her legs (I’m going to have to grab video of this some day because it’s awesome to watch).  Little did I know that she was supposed to be limited to walking for the four days after her injections - whoops!  Hopefully that wasn’t a waste of $500.  The vet said that she’s looking really good and we’re doing a fine job putting weight on her slowly.  She’s still standing taller at her hips, and he said that she’s likely to grow taller, even though she’s only five.  He suspects that her lack of nutrition stunted her growth and now that she has proper nutrition, her body is finally catching up.  Mae has a fungus growing on her back shins and also weird skin dander showing up on her back.  I’m treating them both with Microtek - I spray that stuff on everything.  It doesn’t seem to bother her and does seem to soothe her skin.  Ahh the joys of summer, right?

During June, I also had my first jump lesson with Mae, where we worked on jumping a single line.  She’s exactly what you would expect from a green horse, and slow and steady is the name of the game.  She jumps with one foot at a time, maybe two if we’re lucky.  Our first lesson, we went up to over 18 inches, and she didn’t give the fences a second look.  My favourite thing about jumping with her is how steady and calm her trot / canter is on the back side.  Ryon would get energized and excited after each jump and look to rush to the next fence.  Not so with Mae (I’m not sure she knows what to expect next to be honest) and it feels like a much saner ride.  B took some video from that lesson, which I’ve included below.  Don't mind my awkward t-rex style hand positioning; I'm trying to stay out of her face.


On a June goal update, I used hydrophane in around five coats on my jump saddle, which was pretty faded.  As you can see from the before and after pictures, the hydrophane helped but not as much as I thought it would.  I may take it home again and apply a few more coats each month and hopefully that’ll help bring it back to a more even colour.


Also, I had one inquiry from a girl who wants to lease Ryon.  I’m putting together a lessee application for her and her parents but I’m optimistic that it works out.  She sounds like she really wants a buddy to just hang out with, which he’d be perfect for.

Work on outside rein cues