The one where we both have meltdowns

One of the perks of Bowie's kennel cough diagnosis is that he is quarantined from other dogs for two weeks <most sarcastic comment of 2018>.  This means that he is banned from attending doggy daycare, my lifeline to sanity while Bryan is traveling for work.  When we leave him at home unattended outside of his crate, typically he quietly watches squirrels and birds from the sitting room and waits patiently for us to get home.  Because it's been raining buckets for the last two weeks, we haven't been able to get him out to the park and let him off leash.  He's been sitting on a rocket launcher of all that unspent energy.  I came home from work to let him out at lunch mid-week and found this. 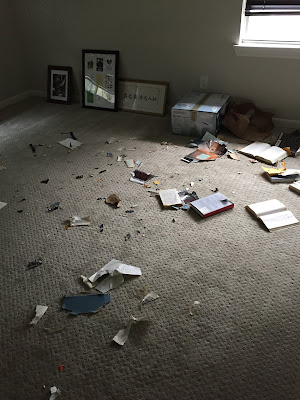 He had gone into one of the spare bedrooms, found a paper bag with books earmarked for donation, and shredded each one.  Including the hardcovers.  Especially the hardcovers.  We also had our tennis racquets sitting on the floor in that room, and he chewed the grips off the handles.  Needless to say, his roaming privileges have been restricted and he now spends the day in solitary confinement.

Later that same day after I got home from work, I took him for a long walk so he could stretch his limbs.  After our walk, he went into our backyard to do some exploring and promptly caked all four paws with mud.  I carried him to the bathroom to rinse him off in the tub and halfway through, he hopped out and covered the entire bathroom - walls, shower curtain, shower mat, floor - with muddy water.  It was at this point that I sat down covered in dirty water and dog hair on the bathroom floor and promptly called Bryan: you need to get rid of the dog.

After trying to calm me down, he assured me that the dog is going through a phase and tried to rationalize his behavior.  "He's 8 months old, testing the boundaries, and bored."  At home alone with the monster, I didn't really want to hear it but acceded to all his points.  On Monday, when Bryan was home alone with the dog, he went to run an errand for 20 minutes, leaving the dog out of the crate.  He didn't find the damages until Tuesday, when he was about to leave on a trip.  Bowie had gotten into a cardboard box and started shredding it and the styrofoam packing material inside.  It was at this point that that calm, cool collected Bryan disappeared.

The dog was sent back into solitary confinement which is where he'll stay for the foreseeable future.  Like any puppy, he acted ashamed when dragged back over to the scene of the crime.  We then had a few hours of very good behavior - Bowie's way of telling us he's sorry.  During that evening's walk, he didn't pull on his leash.  We both casually strolled along in the twilight, enjoying each other's company.  Up until the point where he found a dead rotting rat and rolled in it.

And dear reader, I didn't even cry.