A little get out of town

Whenever Bryan hears me say “maybe we should think about moving again,” he quickly tries to look up short road trips that we can do from Dallas.  For the last few weeks, I’ve had itchy feet and been talking about moving somewhere else and the thought of that (particularly with this heat) motivated us to get out of town for one night this past weekend.  I know that at this point, everyone has cabin fever and is a little sick of being stuck in their homes, regardless of how nice their homes are.  Same folks, same.  We also haven’t had a break from work since Christmas and haven’t gone anywhere except for our short road trip to Central Texas in January.  I literally went to the grocery store for the first time in over three months last week.

So it was that this weekend, I found myself driving down a two track to a cute little Airbnb in the middle of 40 acres in the countryside.  We were greeted by the hosts and their four dogs, four cows, and two horses (both rescues).  The fields were dotted with bright yellow wildflowers and Bowie immediately took off to start exploring.  Despite only being there less than 24 hours, during our visit we managed to visit a local brewery, local winery, and a local restaurant.  We hadn’t planned an agenda and had literally booked the place the night before but grabbing a beer and a few bottles of wine is never a bad idea so off we went. 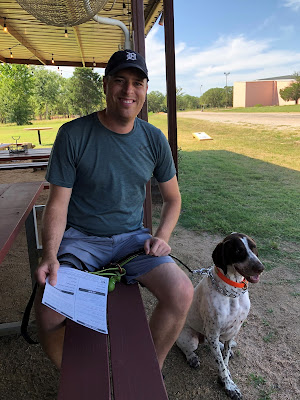 Cedar Creek Brewery was near Cedar Creek Lake and only had outside seating open, which was fine as it was shaded and had plenty of fans.  I imagine during the summer and when everything is open, it’d be a fun place to stop by after the lake to grab some casual food and good local beers.  That being said, there were still quite a few people on Friday afternoon and the live music was getting warmed up for the evening.

Cannon Creek Winery was back toward the Airbnb and one that Bryan quickly googled on the way back.  We had intended on sitting outside since Bowie was with us.  As we were the only people there, the owners graciously invited all of us inside to do the tastings and we ended up meeting the entire family, while they told us that the winery was their retirement plan and that they’ve slowly been expanding operations every year they’ve been open.  I'll admit more than a little jealousy of the second careers that they had chosen and it definitely gave me something to aspire toward.

We ordered dinner for pick up from the Kicking Mule, a local restaurant located in the historical town square of Canton, TX.  They had indoor seating available but since we still had the dog, we took it back to the house.  The town center was eerily quiet - I’m assuming most of the businesses were closed early because of COVID.  Canton is known for its big trade days (read antique-style flea market) once a month.  It looked like there were a few restaurants that closed down because of the lack of business due to the Coronavirus.  Hopefully trade days are still as popular - where else are you going to be able to get your antiquing fix?


Surprisingly, the part of the getaway I enjoyed the most was talking to people.  It seems as though most people are starved of social interaction.  Everyone we met was so friendly and warm.  Most places were far from crowded and there was the constant worry in the back of my head that these places wouldn’t be around the next time we came back.  After dinner that evening, Bryan began looking for acreage for sale in the vicinity.  I know he has dreams of owning a ranchette and taking his boat out on the lake on the weekends.  Someday we’ll have a little spot of our own and escape the rat race for good.  I hope that you all have been able to satiate those itchy feet safely and support your local small towns while you’re at it.