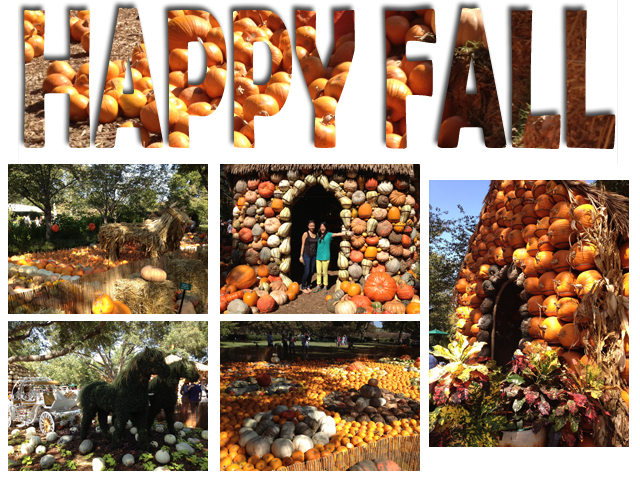 This weekend, my family and I went to the pumpkin patch that beats ALL pumpkin patches.  Think your pumpkin patch is awesome Charlie Brown?  Try again!  Called Cinderella's Pumpkin Village, the exhibit at the local arboretum featured over 50,000 pumpkins, squash and gourds.  I've honestly never seen more pumpkins in my entire life and so many different kinds as well.  Bushels of hay were stacked up so that parents could pose their children with different sized pumpkins and my family took obligatory photos with them as well.*  Never you mind that we were the oldest people there without children.  It was a Pumpkin Paradise!  The weather was a fairly warm 85 degrees so by the time we left, we had a bit of colour to our cheeks.  And most significantly, my parents bought a family membership to the arboretum so that they can visit year-round and also bring their friends.  My parents are now patrons of the arts - I'm so proud of them.


*My mom wanted to take a picture in Cinderella's pumpkin carriage.  Siri and I quickly vetoed that idea when we saw only wailing infants in that line.

**I'm really curious as to what happens to the pumpkins after the exhibit is over.  Are they mulched into compost?  Are they given away to make pies and such?  Tell me!