When I was a wee one, my parents liked to dress me up** (I think most parents do this - if I were a parent, I'd definitely take full advantage of when my child could not pick his/her own wardrobe).  My mother would Barbie me up in foofy dresses with spotted pink heart tights.  The earliest Halloween costume that I can remember, I was dressed up as Barbie.  I cried, nay, WAILED the entire time we were trick or treating because my best friend Mo had dressed up as a pirate and his fake mustache was freaking me out.  There was also one particular pre-k Halloween costume where my mom dressed me as an 80s rock star (Note: the decade is important).  She bought me a metallic rainbow wig and dressed me in her flashiest gold lamé shirt (tunic-sized on me).  I was caked in turquoise eye shadow that extended up through my eye brows and given a microphone as a prop.  And diva I did, the whole day long.

Flash forward to when I was in elementary school and was too cool for those types of girlie costumes.  No princess or ballerina costumes for me.  I wanted to be something scary, something mean, something dangerous.  Enter Count Roothula.  With her hardcore skull and crossbones earrings.  And epic Snoopy Christmas tights.  Yes, my dad drew in the fake blood around my mouth and the widow's peak.*  If this picture doesn't scare you sleepless, I don't know what will. 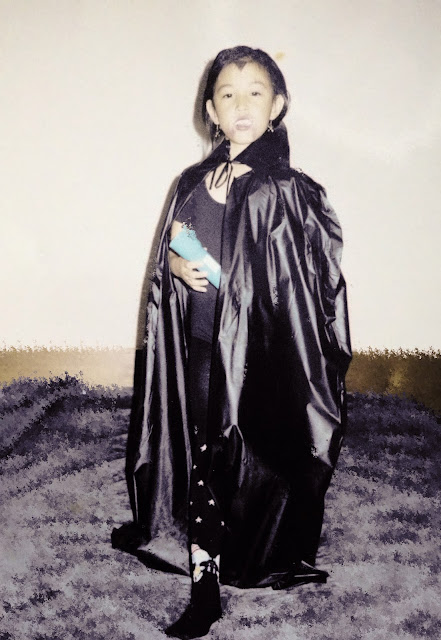 *Side story about my dad, he was in theater all throughout college and wanted to get into costume and makeup design as a career.  The makeup for this Halloween costume was toned down.  When I was two years old, he dressed me up as a mini business man.  I wore a button down white shirt, tie and carried a briefcase.  He also drew a mustache on me and stuck a fake paper cigarette in my mouth.  This was not for Halloween.  We have pictures.

**My parents didn't seem to bother as much with my younger sister.  They were perfectly content to let her put a tutu on over her pjs and pull a pair of tights on her head as her costume for Halloween.