Ulcers, abscesses, and vets - oh my! 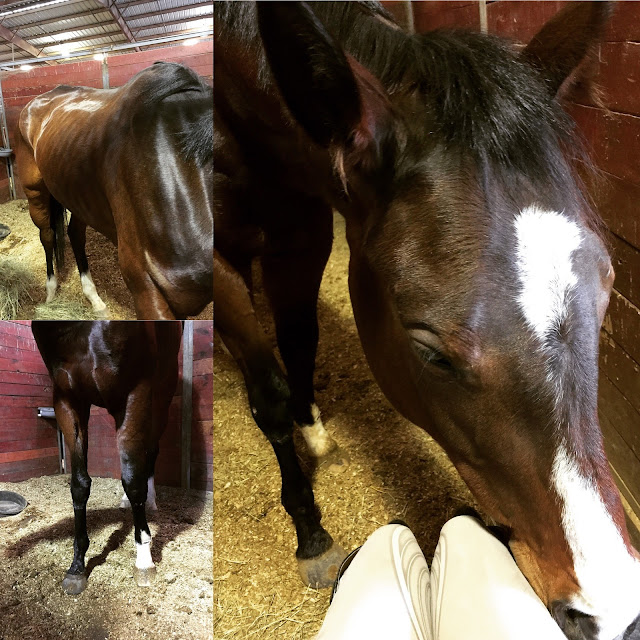 You all have been so kind in sending kind thoughts about Maeby and her recovery over the last month.  I didn’t want to write about her until we knew she was fully out of the woods, and she made that more difficult with her compounding health issues.  She is on the upswing now (finally) after far too many vet visits, shots, and responding incredibly well to all of her different medications and treatments.  The poor girl has been through the wringer the past few weeks; I’d hate to think what things would have been like if we hadn’t brought her to Texas.

At the outset, although we didn’t scope Mae we were almost 100% positive that ulcers were what was causing her discomfort and pain.  After her first vet visit, she was prescribed Sucralfate (powder form).  I had also ordered more than a two weeks supply of GastroGard.  We stopped feeding her grain altogether and kept her only on minimal amounts of hay, not wanting to exacerbate her ulcers.  Three days after her “colic-scare” and on the Sucralfate, she had perked up significantly and was looking less uncomfortable.  However, she was still spending more time lying down on her side than standing up and walking around.  My trainer received endless calls and texts from other worried horse folk at our barn, asking if she knew about the mare that looked like it was dead out in the paddocks.  The warmer weather worked in our favor and she loved sunbathing in the warm spots on her turnout, with her quarab paddock mate standing over her and keeping watch as best he could.

After the GastroGard arrived from FarmVet after a harried weekend online order, we started giving her a full dosage daily.  She improved markedly, slowly regaining her appetite and lying down less and less.  After the third day of the GastroGard, I found her calmly standing in her stall instead of lying prone.  We continued (and are still continuing) with the GastroGard and started slowly introducing grain because almost overnight, unsurprisingly, she had turned into a bag of skin and bones.  Mae was already pretty thin when she arrived and must have lost over 100 lbs over a very short time period.  She was so skinny that I had the irrational fear that animal services was going to get called to haul her away.

In addition, because she had been lying down and getting up so much, her body and legs were covered with open, bleeding pressure sores.  Since our first priority had been treating the ulcers, we didn’t pay the sores as much attention.  One of the sores on the “elbow” of her front left leg blew up overnight and turned into an abscess.  Her leg expanded to four times the size it normally is.  We kept her walking on it, as the swelling would go down with activity and use.  After four days, the abscess  burst on its own, and we happened to have a vet on hand when it happened.  He opened the wound, drained it out further, and left us some antibiotics with instructions to keep the hole open as long as we could to drain it further and to keep it clean.  Every day, we’ve been squeezing on her leg to drain it of pus, blood, and other garbage.  Her leg has been rubbed raw and is almost naked now because of how much we’ve been massaging it.  Almost a week later, her leg is now finally down to almost its normal size.  She still walks with a slight limp but works out of it with increased activity.  She clearly doesn’t like us pressing and squeezing, but she doesn’t make a big deal of it and only turns her head to watch.

Our number one priority now is putting her weight back on.  She’s getting a healthy amount of hay and grain every day, as well as Cool Calories and a cup of canola oil with her grain (the last thing I need is a horse that founders).  If that’s not the recipe for a fat horse, I may need to start throwing some potato chips and Totino’s pizza rolls in there.  And so we continue with the adventures in baby horse raising (and apparently rescuing).  No day is exactly like the last and will be like the next.