On my spoiled boy 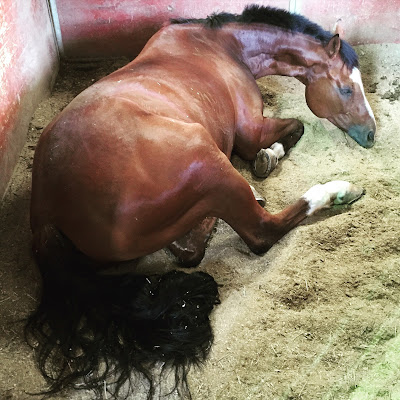 Last week, my entire family and B turned up to watch one of my jump lessons with Ryon, which is the first time my parents have seen me in a horseback riding lesson in the past 20 years.  They were adequately impressed, the way Asian parents are where they won’t tell you how proud they are but instead take loads of pictures and video.

It got me thinking about how far Ryon and I have come since his first summer in Dallas in 2014.  Back then, each flinch, spook, and head toss was a message that I honed in on - one that I heard as if through loudspeakers.  I’d try to decipher his body language - oh he’s mad at me because he’s eating dinner late today.  Ryon would wiggle and wobble all through the arena, refusing to pick a direction or listen to any of my suggestions on where to go.

Now I don’t make a note of each head toss, stomp, and tail whisk and can even occasionally get him to execute a perfect 20 meter circle or even a straight line.  Sometimes (a lot of times) he still acts up because he’s ornery - pissed off that he’s in a barn with all these animals - and sometimes he’s a pleasant, even-tempered, sort-of-sweet horse.  My trainer and I remark that we don’t know what animal we’re going to get on a given day.

However, he is getting downright spoiled.  Every visitor earns him a cookie and head scratch.  B hunts down grass and clover for him to snack on after my lessons, and we’ve installed his THIRD box fan in his stall.  Now that he has a punk rocker look going on, I make a point of trimming his mane every few weeks.  He also gets a full shampoo and conditioner treatment on a weekly basis, in addition to the daily brush down with a natural bristle brush (and a separate softer brush for his face).  His “spa” treatment is more extensive than most Dallas women’s (and that’s saying something).

We go flying in our jump lessons on a weekly basis now.  He’s impatient over low jump courses and rushes through them, as though he knows if he finishes them quickly, he’ll get to move on to higher jumps.  My trainer and I are teaching him that he WILL get to jump the big ones eventually.  I can’t help but feel that it’s partly my fault.  I had a mental hang up at the intimidating three foot level, but since we’ve sneakily moved up, three feet doesn’t look so high anymore.  It’s officially hotter than hell in Texas now, so by the time we’re finished, both of us are drenched in sweat.  The horses have new turn out paddocks with large, plastic water troughs.  Ryon turns each of these into his own private kiddie pool and plants his front feet in them, spilling water all over in the process while he splashes about.

I’m sure next week - actually probably tonight - will bring a separate set of challenges from him that I haven’t foreseen.  I've learned to expect the unexpected, but despite the inconsistency of it all, I count it as my good luck that I get to spend my time sweating away with my spoiled boy.