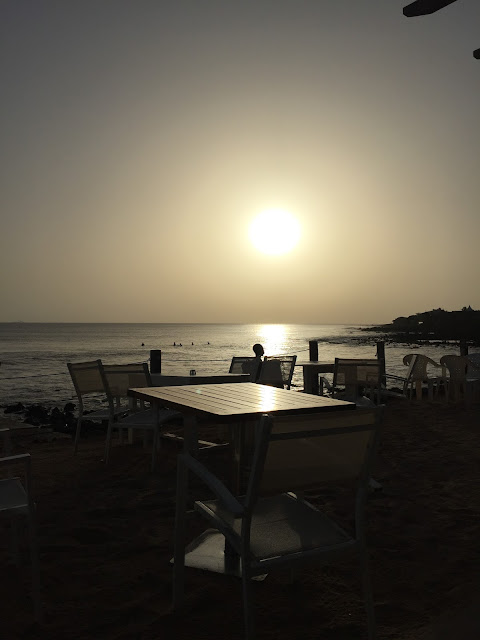 When you deplane in Senegal, the first thing you’re hit with is the wall of humidity, which was so soothing after spending over six hours on a plane breathing recirculated dry air.  The next is the smell, which is hot and briny, from the sea.  We arrived in the middle of monsoon season, and there were mosquitoes lazily floating in circles everywhere.  Sleep with your mosquito nets down, and make sure to take your Malarone, regardless of the digestive distress it causes.  The national language is French, of which mine is utterly deplorable, so we relied heavily on the French expats and locals to guide us through the city as well as in a few of the meetings.  I’ve got to start picking up more, particularly if we’re going to be going back to the west coast of Africa more frequently.

We ate wonderfully while we were in country.  The takeout fast food (kebabs) that they grabbed for us for lunch in the office were smothered in a mystery sauce had me gracefully stuffing my face.  Also, I tried baobab juice, which is delicious and has the added benefit of supposedly being an aphrodisiac.  When we did manage to make it out for meals, we tried our very best for a coastal view.  Serenity is watching the sunset from a little restaurant on the surf that serves anything from burgers to pizza to sushi holding a cold beer.  The only sound you hear are the waves crashing and hawkers milling up and down the beach selling locally made trinkets.  Dakar is beautifully vibrant at night.  It seems as though people don’t come out in the evenings until around 8 pm and even at 11 pm, bodegas are still open and people are out and about on the streets.

I didn’t get to spend nearly enough time in the city; it was a quick in-and-out trip sandwiched between way too much time spent in airplanes and airport lounges.  The combination of time difference, language changes, and airplane food had me fuzzy headed for over a week.  As with most places I go for work, we mostly see the inside of hotels and conference rooms and in Senegal, there are loads more sights to see and more things to eat.  Au revoir et à bientôt!