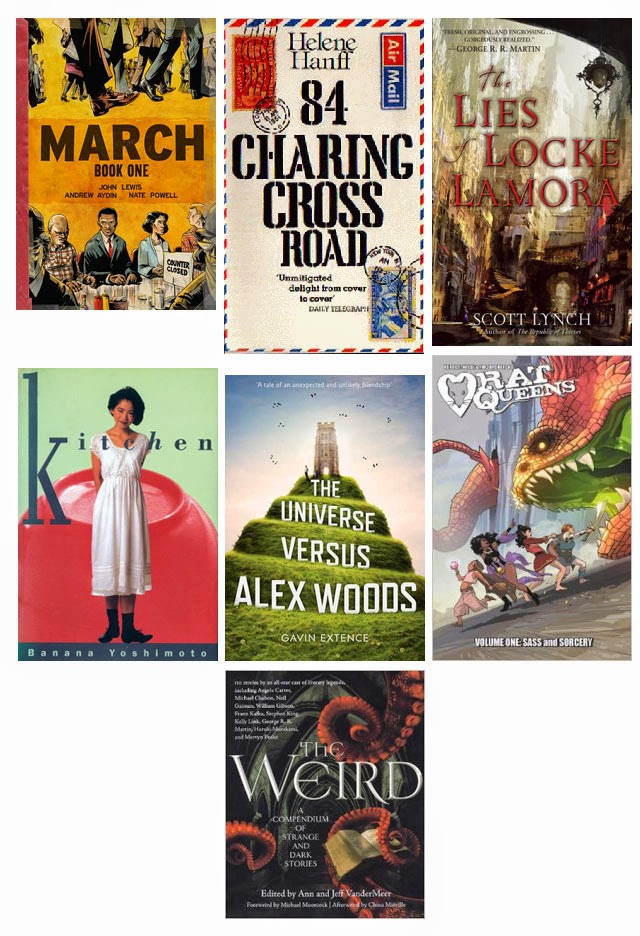 Remember that one time I was really behind on book reviews this past summer and promised you guys that wouldn’t happen again?  Yeah about that.  Whoops.  Honestly, instead of feeling wholly uninspired by the books I was reading this fall, I came across some really stellar ones and then cranked up the reading a notch or two.  So much so that I fell behind on both the reviews I've been writing for my blog and also for Amy’s Bibliophile's Adventurers Club.  There are a ton of great books that I've powered through this fall and I will eventually get around to sharing them all with you.  If you're looking for a real time way to follow my reading, GoodReads is still the best bet.  I will endeavour to be better about book reviews on my blog though, really have to be better at follow through, particularly as I rely so heavily on others for book recommendations.

I’m not a crier - nary a tear has been shed at the barrage of heavy-handed holiday commercials - but The Universe vs. Alex Woods made me tear up.  That’s always a good way to start a book review, right?  Alex Woods is a teenage boy who strikes up a relationship with his antiquarian neighbor Mr. Peterson through a mutual love of Kurt Vonnegut.  For fear of giving the bulk of the plot away, it revolves around the choice of death and gets heavy pretty quickly.  The quick moral of the story is that both life and death should be treated with respect and dignity.  I’ll leave it at that; don’t forget your Kleenexes.

March: Book One is the first graphic memoir in a trilogy about the life of John Lewis, US Congressman and US civil rights leader.  Illustrated in black and white, the book tells the story of Lewis’s life by way of flashback and how he became an advocate for non-violence as a means for protesting.  I am often guilty of being wrapped up in the fantastical make-believe world of many comic books but it’s worth reminding myself of the real life heroes that exist and the tough road for them to get there.

Kitchen by Banana Yoshimoto (yep, Banana) may be one of the most poignant books that I’ve read all year.  I’ve dogeared, highlighted, underlined, and flagged paragraphs in this book.  It’s one of those that’s quietly impactful, a little like being stunned by silence.  The book is made up of two short stories which are centered around loss of a dear one.  The first one, which claims the title of the book, is about a young woman who after the death of her grandmother, moves in with her friend and her friend’s transgender mother.  The kitchen of their apartment is what draws in our main character and connects her with the new family.  A Silverstone frying pan and a delightful German-made vegetable peeler - a peeler to make even the laziest grandmother enjoy slip, slipping those skins off.  Like lyrics, I tell you.

If you’re looking for an epic swashbuckling adventure series, the Gentleman Bastard series by Scott Lynch are it.  Locke Lamora is a Robin Hood-type character in a Venice-based city.  Learning to steal and deceive as a child orphan working for a master thief from a young age, Locke now runs the gang of con artists (think Ocean's 11 set in medieval times) except for instead of pinching purses from crowds in the street, now they are after larger, more valuable and more dangerous prizes.  As a testament to how popular the series is, there are three books out so far and at least four more planned as well as a film in process.

Rat Queens is a package of vibrant, flamboyant girl power bundled up into a graphic novel.  There is no doubt about it, this is one bright and punchy book, which is fitting for the subject.  Rat Queens is about a gang of girl dwarves, elves, clerics who find trouble and kick it in the front teeth.  The girls  are filled with sass and kick-assedness; they swear, spit, flirt, manipulate, intoxicate, seduce, and generally have a ball of a time and who can’t get down with that.  This comic book has won All The Awards including the 2014 Eisner Award and is also in the process of being turned into a tv series.

I read the e-book version of The Weird: Compendium of Strange and Dark Stories over a series of months whilst running on the treadmill.  As if the text bouncing up and down would shake some sanity into the stories it contains.  The book is a chronological collection of Weird stories, some of which are scary and creepy and others that are just plain weird (as the title suggests).  Oh you'll find Lovecraft, Mieville, Gaiman, Bradbury, Jackson, and many many more.  This is the kind of book that will make you want to sleep with the anthology safely in the other room.

I laughed out loud so many times while reading 84, Charing Cross Road.  It is a collection of the correspondence between Helene Hanff in NYC and Frank Doel, chief buyer for Marks & Co. booksellers in London, beginning in 1949 and lasting over the span of 22 years.  When you keep in mind when the book is written, the sarcasm and wit of Hanff is so striking, as is the contrasting formality that Doel takes with her.  The friendship that they develop over the decades via post is the result of two kindred spirits finding each other.  Spoiler alert: Hanff sadly does not makes it over the pond to 84, Charing Cross to meet the Frank Doel in person before his death but has blessed millions of readers by publishing the letters written between them.