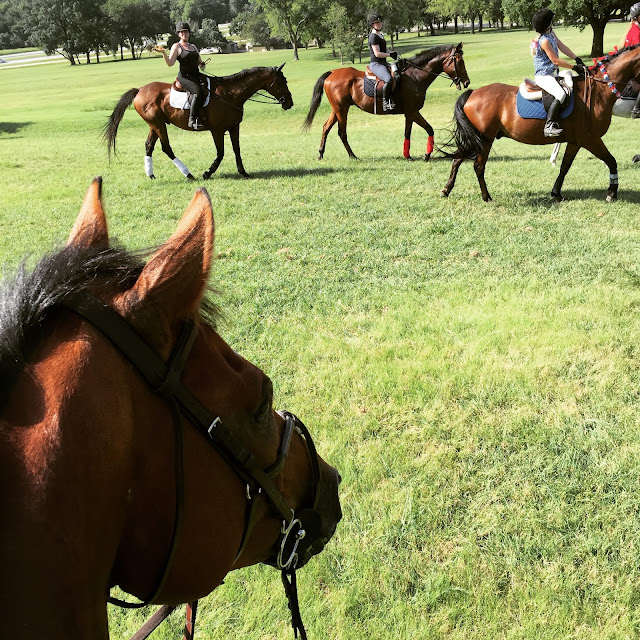 Ryon sneezes at the dust raised on the trails.  The rain that made it impossible to go out this spring has vanished and left exposed dirt everywhere.  If you look closely, you can see the hoofprints we’ve left behind us.


This is the second summer that Ryon and I have spent together and we’ve settled into a nice rocking rhythm.  It took nine months for him to acclimate to our barn and quit spooking at the shadows by the bleachers, puffs of wind, and cars backfiring.  Now he won’t even deign to twitch his tail at the commercial planes that roar overhead on their way to the airport.  Once distracted by every slight peripheral movement or sound, RyGuy (one of his many given nicknames) is now laser focused and alert in the arena, literally chomping at the bit for his turn to fly over the jump courses we’ve set up for him.


We have also finally convinced him that he is, indeed, a horse.


He’s very recently learned how to roll in the perma-mud puddles out in the turnouts, oftentimes only coating one side of his body in a grey shell of claylike mud.  I am no longer neurotically shampooing and conditioning his mane and tail on a weekly basis, as he’s just as happy covered with a coating of dirt as he was buffed to a shine.  Funny enough, the dirt layer has kept the flies at bay much better than when I had him sparkling like a penny last year.


He’s also acted much more like the pack animal that he’s supposed to be.  He no longer angrily kicks the dividing wall between himself and his neighbor Bo Saint Pony, and instead removes the panels between them.  The wall is now so low that that they can stick their respective heads over the side and gossip about who they have a crush on and which rider they’re planning to torment.  We have him turned out during the day in a large paddock with two grey horses (remember how he hates those?), who have very quickly put him his proper herd position (definitely not the alpha, my poor Ryon).


As we get further into the summer, the heat mellows out all of the horses and makes them much more lazy.  One afternoon, very soon, I’m grabbing a lead rope and a book and finding a shaded spot under a tree, enjoying summer the way that a girl and a horse are supposed to.