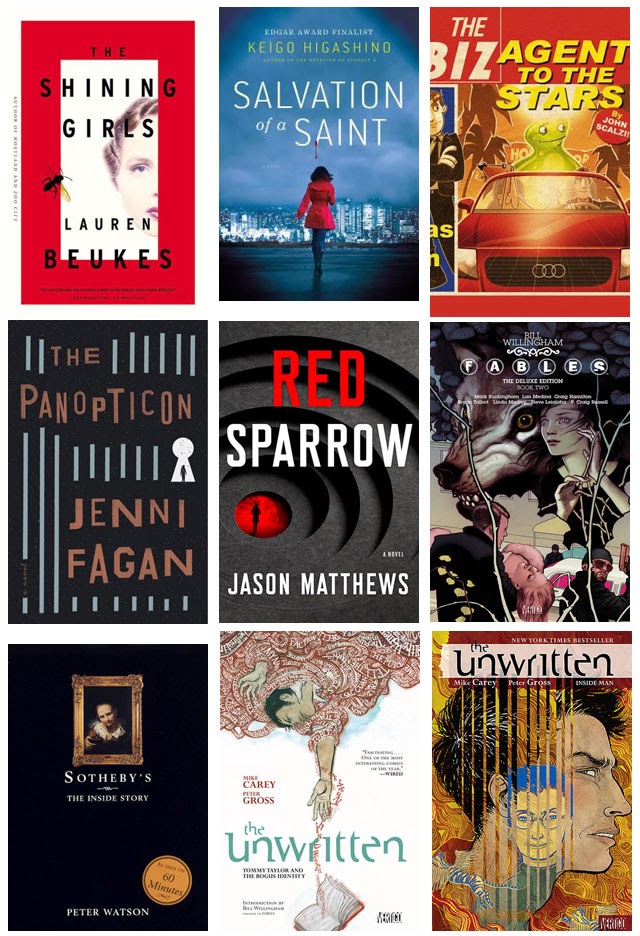 Instead of shrinking that stack of books that grows next to my nightstand, like some sort of vampire tree, I've only managed to feed it and make it larger over the last few weeks.  My Amazon wish list?  Also growing like Rapunzel's unruly hair (there's no way it's as nicely braided as it looks in all of those fairytale illustrations, no flipping way).  More suggestions from friends, like Sotheby's: The Inside Story from Erin at Like / Want / Need, but also book lists.  Those book lists are my kryptonite.

Ooo boy, there were some goodies in February though.  I have done book reviews for Red Sparrow (here) and Agent for the Stars (here) over on Amy's book blog The Bibliophile's Adventurers Club.  One is an intriguing, double-crossing, Russia-based spy novel and the other is a sci fi self-published piece by a now NYT Best Selling Author and both are highly recommended.  Also, Unwritten is the latest graphic novel series that I've discovered with a little twist on the wonderful world of a Harry Potter-ish type tale.  I know you guys are thinking - another graphic novel?  Hasn't she had enough?  The answer to that is a resounding NO.  And I'm journeying back to the comic book store just to discover more every week.  I really hope to do a book review for The Panopticon soon as well so I don't want to give too much of that away but suffice it to say that it's one of the most decent Coming of Age books that I've read in a very, very long time.  And I hate that genre so you know it's got to be something.

2013 Reading Record - you better watch out because I'm coming for you!