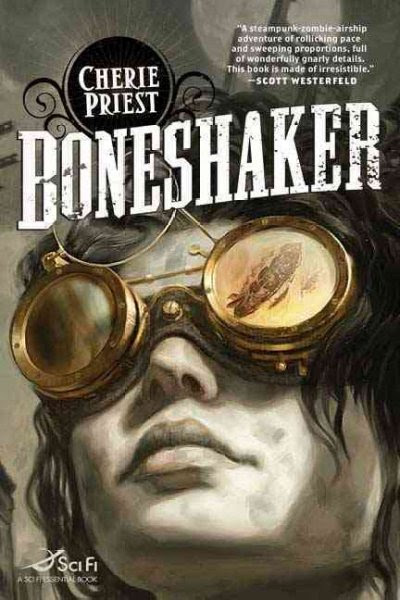 Boneshaker by Cherie Priest is a novel with a steampunk setting, with zombies or "rotters" running rampant in it.  That alone should sell you on it.  The book follows two characters - teenager Zeke and his mother Briar - through an infected area of long ago Seattle, Washington.  The "Blight" as it's called is seeping from the ground and turns those who breathe it into zombies within minutes.  The city center, the source of the Blight, and the surrounding areas are walled off and those within it were left to die.  Zeke enters the quarantined zone in an effort to clear his family name, which has him and his mother living in penury on the Outskirts.  Briar follows him to bring him home, knowing that Zeke is unable to handle the horrors of the dead city.  The book does not skimp on action and I could see this easily being made into an action / sci fi movie.  And like any good steampunk book, there are plenty of dirigibles and even a dirigible chase sequence.  The end is quick and vague and there is a moment where Briar reveals everything to Zeke that is a bit of a letdown.  But Cherie Priest is a good story teller and her alternative landscape of America is one that I look forward to reading more about in her other novels.
Labels: Books