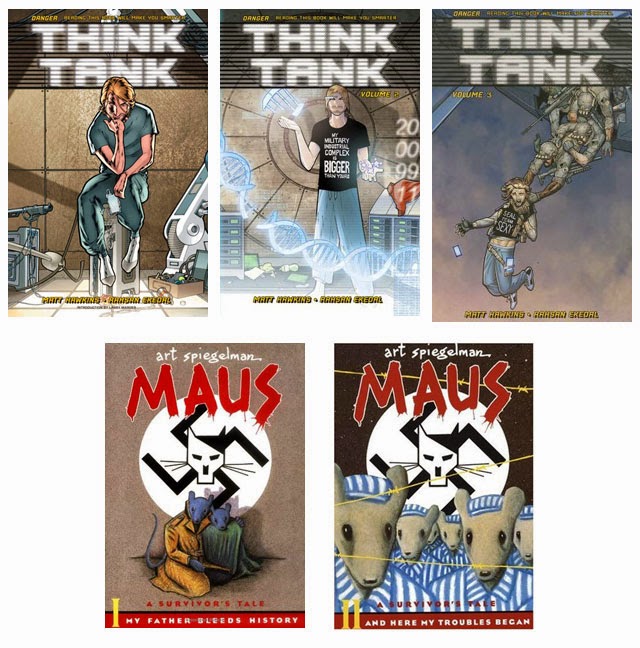 Dads are notoriously difficult to shop for.  Goofy socks?  Check.  Useless techno gadgets?  Check.  Uncomfortable scratchy sweaters with cheesy patterns that will only been worn on that specific Christmas day and never seen again?  Check.

This year though, I may have my dad pegged.  In the past few weeks, I've gotten my dad hooked on graphic novels.  It's a Christmas miracle!  Yes, a 60+ year old man who has been stubbornly reading only non-fiction has been devouring comic books.  After a frantic email from him mid-week after he finished the last Think Tank volume, I brought him both Maus volumes... which he managed to finish that very same day.

The Think Tank series is about Dr. David Loren, a genius, hacker, inventor, and "investment" of the US military.  His inventions and ideas have been weaponized by the military and when he has a change of heart about how his creations are being used to kill hundreds of people, the organization won't let him quit.  Or leave.  So what's a guy to do except for try and escape?  The series is full of smart science, weapons, action, and conspiracy - all of which my dad enjoys.  Even better, half of each volume is dedicated to the factual research and real science that author Matt Hawkins did for the comic.

Maus is a classic graphic memoir, story about a father and his son, and also a story about the Holocaust, which I've blogged about here on Book Adventurers (I'll save you the pain of reading it here again).  Dad kept asking me if there was a movie made out of this story - Spielberg, you should be expecting an email soon. 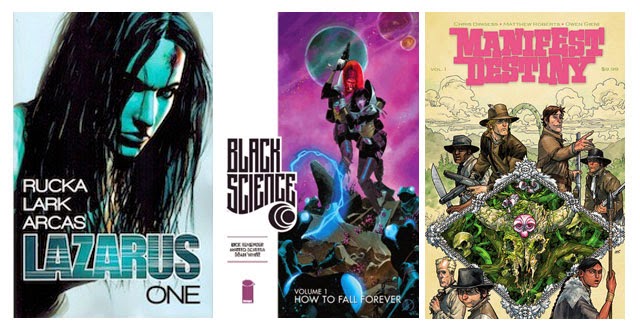 For Christmas, I'm thinking of putting in an order for these graphic novels, which were honestly just tons of fun.  Lazarus takes place in the future where the world is in a state of organized chaos and select families control large tracts of land, worked by serfs.  Each family has a member who acts as its protector, their Lazarus, and Forever Carlyle is that warrior for her family.  But are things really as they seem and what isn't her family telling her?  In Black Science, a group of scientists have figured out how to travel between multiple universes.  Unfortunately (and obviously) the instrument has malfunctioned and sends the scientists careening throughout the multiverse without any idea of where they'll end up next and also how they'll ever get home.  Manifest Destiny is about the journey of Lewis and Clark... and MONSTERS.  It's history AND monsters and one ass-kicking Sacagawea.  Enough said.

Note: There is no reason these graphic novels wouldn't be great gifts for anyone else (and not only dads) or yourself!