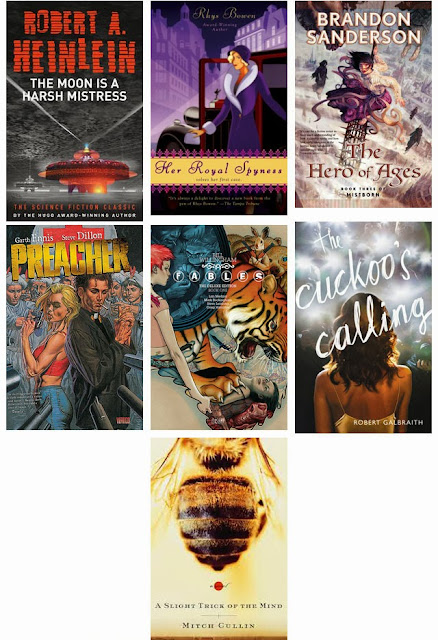 I'm doing a mini celebratory dance because I reached my 2013 reading goal <throws confetti> before December hit.  I might have hit some rough patches along the way and shunned human interaction to get here but goshdarnit I'm over 100 books read and a month ahead of schedule.  Recently though, my reading tear has reached a slow crawl.  Luckily, even with my snail-paced progress, I've been able to dig up some quite excellent books such as The Cuckoo's Calling by Robert Galbraith aka J.K. Rowling and Fables by Bill Willingham.

I hate to add any additional hype around J.K. Rowling's non-Harry Potter work but I was pleasantly surprised with her foray into mystery writing.  So even though I'm going to tell you "don't listen to anyone else says", if you like detective novels with fleshed out characters and substantial story lines, you should definitely pick up The Cuckoo's Calling.  I won't ruin anymore here but maybe later on Book Adventurers.

Unlike most of my other graphic novels, I discovered Fables on my own.  When the first comic book was published in 2002, it preempted the modernization of fairy tales that we're all too familiar with now on television, what with shows like Grimm and Once Upon a Time.  And I'm not complaining; it's always fun to see your favourite fairy tale characters get a little grimy and dirty (and maybe even bloodied up and killed).  The deluxe editions are hardbound and chock full of glossy pages.  If they weren't over $20 a volume, I'd have the entire collection by now.  For the time being, I'll pace myself and hopefully this series will last me for awhile.