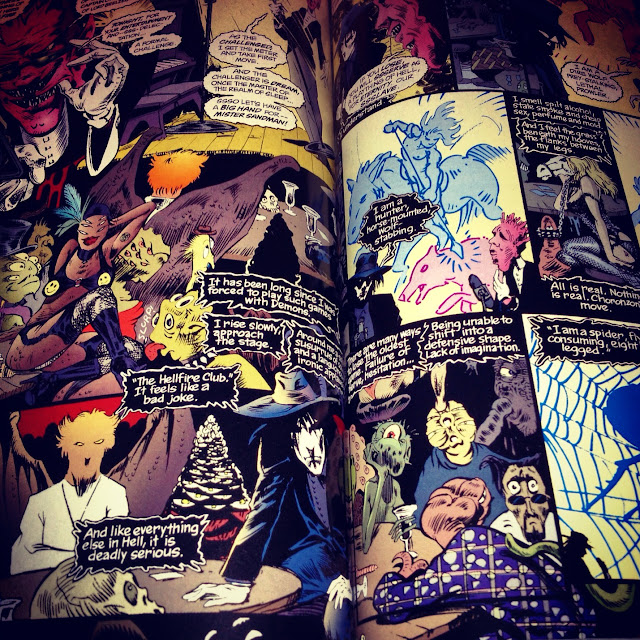 It started, like most good things do, within the family.  My older cousin, Dr. Cousin, MD now thank-you-very-much, had a knack for sharing some of his best finds with us.  He is the one who introduced my sister and I to Watchmen by Alan Moore and Neil Gaiman many years ago.  And its really stuck with both of us, so much so that I bought my sister The Walking Dead graphic novel for Christmas this year, tres a apropos.  The wonderful world of graphic novels is an adventure, to sum it up quite inadequately.  In a time when we are constantly and relentlessly bombarded by colours, sounds, images and data, a graphic novel - to me - can still overwhelm all of those things and put me into sensory overload.

I picked up the first volume of The Sandman series by Neil Gaiman this weekend from a comic book store (perhaps a story for another day), surprised that I hadn't delved into it sooner.  The pictures are a vortex that literally suck you into the page and force you to pay attention, if the font alone doesn't do it.  One of the most arresting characters that crops up in the book is the Sandman's sister.  She doesn't stick around for long but when she's around, ::shudder::, you want her to go away but at the same time, you don't.  She is the embodiment of the Grim Reaper / Death and leaves no victim alone or behind, releasing the old and ill from their suffering but also snatching babies from their cribs.  Quite a family though, don't you think?  Dreams and Death as brother and sister.

So what is your newest form of distraction or escape?  And what are your tried and true methods?